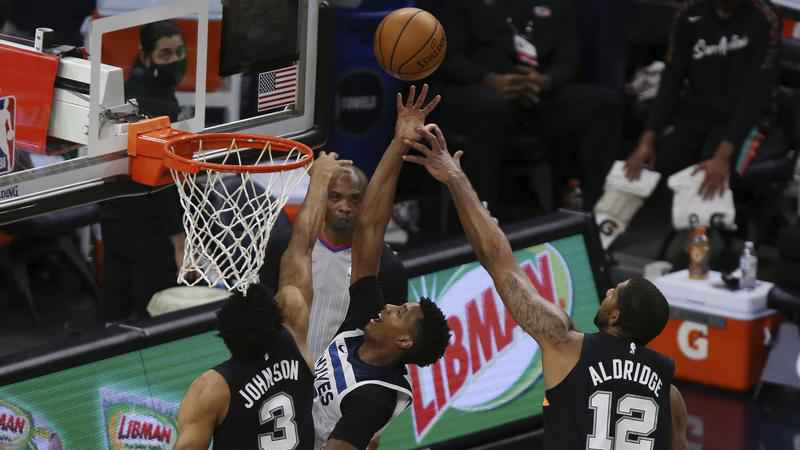 D’Angelo Russell had 27 points, five rebounds and five assists as the Minnesota Timberwolves snapped a seven-game losing streak with a 96-88 win Sunday over the San Antonio Spurs.

Russell scored eight of his points in the fourth quarter, including a 3-pointer to tie the score with 7:02 left and two free throws to ice it with 31.5 seconds remaining. Russell and Malik Beasley, who added 24 points, helped the Wolves get their first win since Dec. 26.

With the score tied at 81, Minnesota scored five straight points and didn’t relinquish the lead. One of the biggest shots in the fourth quarter was a 3-pointer by forward Juancho Hernangómez, who had airballed his previous two shots from 3-point range earlier in the game.

Minnesota was playing without star big man Karl-Anthony Towns, who returned to action Saturday after missing six games with a partial dislocation of his left wrist. Sunday’s absence was part of the plan to ease Towns back in and not a result of any reaggravation of his injury. Sunday’s win was Minnesota’s first without Towns this season.

The Spurs were also without their leading scorer in DeMar DeRozan, who did not play due to personal reasons. DeRozan had 38 points in Saturday’s overtime win against Minnesota.

Lonnie Walker IV picked up the scoring slack with DeRozan out, with a season-high 25 points to lead the Spurs. He paced the offense in the first half with 17 points on 8-of-14 shooting.

LaMarcus Aldridge added 20 points for the Spurs, and Patty Mills scored 18 points off the bench.

Spurs: Walker’s previous season high was 16 points in the season opener against Memphis. … Mills scored 13 of his 18 points in the fourth quarter.

Timberwolves: Josh Okogie returned to action Sunday after missing six games with a hamstring injury. He was on a minutes restriction and scored six points in 20 minutes. … Rookie Anthony Edwards went scoreless on 0-for-8 shooting.

Spurs: San Antonio plays in Oklahoma City on Tuesday in the final game of its five-game road trip.

Timberwolves: Minnesota hosts Memphis on Wednesday and will play the Grizzlies twice in a three-day span at Target Center.