Rosemount beats Centennial for a spot in Class 4A final

Rosemount forged its way into a championship game for the first time in more than three decades following a 40-33 victory over Centennial in the Class AAAA semifinals of the Minnesota State High School League’s Girls Basketball State Tournament on Wednesday, April 7 at Target Center in downtown Minneapolis.

***To see extended highlights between Rosemount vs. Centennial in the Class 4A semifinals, CLICK PLAY ABOVE***

Sophomore guard Nicole O’Neill scored all 10 of her points in the first half and junior guard Alexa Ratzlaff added nine to propel the Irish (20-3) into the big-school championship game on Friday against Chaska, who knocked off Hopkins in the earlier semifinal. The Hawks snapped Hopkins’ 78-game winning streak and handed the Royals, the top-ranked team in the country, their first loss since 2018.

The decisive second half was a grind-it-out series of timely defense, offensive misses and a stretch of more than 11 minutes without a made basket. The Irish outscored the Cougars (21-2) 13-8 in the second half. Ratlaff ended the scoreless streak with a basket and junior Tayah Leenderts added another in the final minute to help the Irish gain separation on the scoreboard. 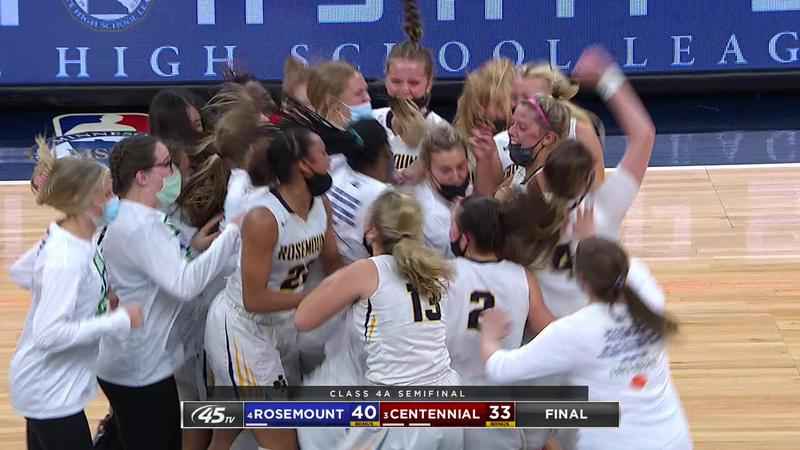 At one point, Rosemount extended its halftime lead to six, 33-27, when senior forward Helen Staley made a three-pointer from the top of the arc with 12:52 remaining in regulation.

Rosemount led by as many as eight points in building a 27-25 advantage at the break. Sophomore guard Nicole O’Neil led the way with 10 points, including six on two successful three-pointers. Staley added four points in the first half, and also pulled down six defensive rebounds. The Irish held the lead for more than 15 minutes of the 18-minute first half.

Centennial led briefly late in the first half, 25-23, when junior guard Sydney Kubes hit a three-pointer with 2:24 remaining. Junior guard Camille Cummings paced the Cougars in the first half with nine points while senior center Jenna Guyer added seven.