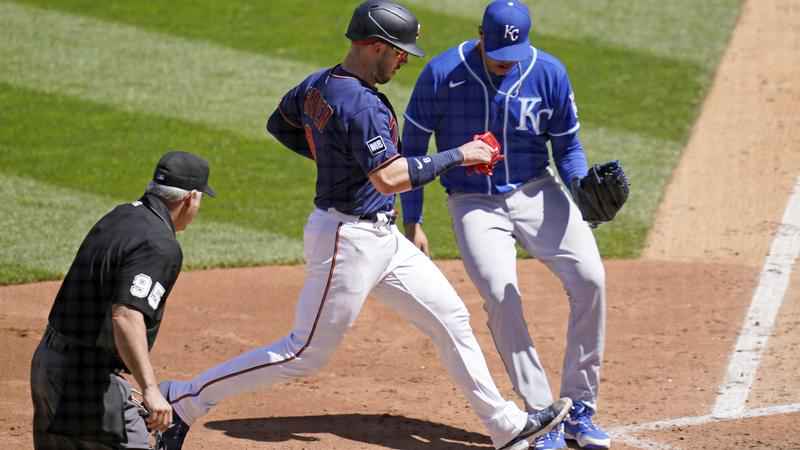 Rookie Trevor Larnach homered and Rob Refsnyder drove in two runs as the Minnesota Twins hung on to beat the Kansas City Royals 6-5 on Saturday afternoon.

Nelson Cruz had an RBI double that drove in Josh Donaldson with a notable run — it was the 2 millionth run scored in Major League Baseball history.

J.A. Happ (3-2) won for the first time in five starts, finishing five innings to set up the Twins for their seventh victory in the last nine games despite another late lapse by the bullpen.

Jorge Alcala and Tyler Duffey pitched a perfect relief inning apiece for the Twins, combining for five strikeouts. Then a rally in the Royals eighth keyed by Hanser Alberto’s leadoff double yielded a run off Hansel Robles.

Adalberto Mondesi hit his first home run of the season in the ninth, a two-run shot off Taylor Rogers to bring the Royals within one. Rogers deftly recovered with three straight outs to record his fourth save in six attempts.

Salvador Perez hit a two-run homer off Happ, the 19th time the 31-year-old catcher has gone deep at Target Field. Perez, who served as the designated hitter, has the most home runs by a visiting player over the 12 seasons the downtown ballpark has been open.

Happ allowed only three hits in an important turn for the 38-year-old right-hander following a rough stretch. He surrendered 19 runs and 24 hits in 13 innings over his previous three starts.

The Royals gave Ervin Santana (0-1) his second start of the season. The former Twins right-hander was pulled after a leadoff walk in the fourth inning and charged with three runs.

Larnach hit his third homer of the season, a solo drive in the second.

According to Major League Baseball, when Donaldson crossed the plate on Cruz’s ground-rule double down the right-field line in the first inning, it represented the 2 millionth run scored in major league history. Donaldson has accounted for 685 of them.

The first run ever recorded was on April 22, 1876, by Tim McGinley of the Boston Red Stockings. Bob Watson was credited with the 1 millionth run scored for the Houston Astros on May 4, 1975.

The announced attendance was 18,444, the largest crowd of the season at Target Field with the Twins currently operating at 60% capacity under relaxed COVID-19 protocols. They will be at 80% in June, before lifting the ticket sales limit in July.

Royals: RF Jorge Soler, who got two hits in the game on Friday to stop an 0-for-21 slump at the plate, was removed after the first inning with discomfort in his right groin.

Twins: RF Max Kepler left the game after the second inning with a mild left hamstring strain, an aggravation of an injury that has bothered him this week. … RHP Juan Minaya, a 30-year-old with 125 career appearances for the Chicago White Sox, was promoted from Triple-A St. Paul. RHP Cody Stashak was sent down with a 6.89 ERA.

Royals: RHP Brad Keller (4-4, 5.72 ERA) will take the mound for the final game of the series. He logged a season-high seven innings in his last start on Monday. Keller allowed seven runs in 4 1/3 innings in a May 2 loss at Minnesota.

Twins: RHP Matt Shoemaker (2-5, 5.48 ERA) will pitch on Sunday afternoon. He’s coming off consecutive quality starts of six or more innings and three runs or fewer for the first time this year.