LeRoy-Ostrander put an exclamation point on its historic football season on Saturday, Nov. 27.

Senior quarterback Chase Johnson powered LeRoy-Ostrander (12-2) with 272 rushing yards and a touchdown and another 140 yards through the air with four other TDs, and in doing so is the newest entry in the Minnesota State High School League’s record book. His 412 offensive yards topped the previous mark of 401 set by Cory Hackett of Waterville-Elysian-Morristown in the Class AA championship game in 1999. Johnson’s performance was equal parts powerful and exhilarating. Perhaps his most eye-popping run was his 54-yard touchdown midway through the first quarter when he went from one sideline to the other weaving through defenders and breaking tackles before finalizing the dash with a lunge into the end zone.

All four of his touchdown passes came in the first half. His final strike of the first half was a 55-yard connection with junior wide receiver Lane Bird that gave the Cardinals a 41-8 lead at the break.

Senior Tanner Olson, a 6-foot-3, 225-pounder, added 116 rushing yards and scored three touchdowns, including two in the second half. He began the season as an offensive lineman, but then switched to being a ball carrier after the Cardinals opened the season 3-2. 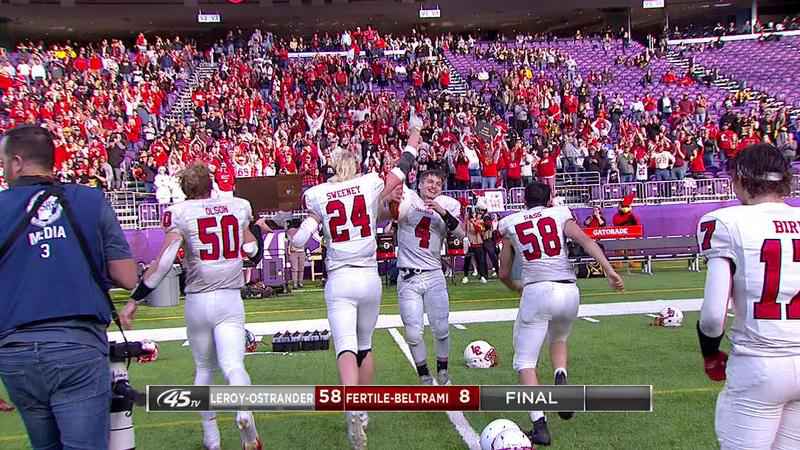 LeRoy-Ostrander celebrates on the field after their 58-8 victory in the 9-Man state championship game at U.S. Bank Stadium.[KSTC/45TV]

The 58 points scored by LeRoy-Ostrander are the most in a Class Nine-Man championship game since Deer Creek had 57 in a victory over Hillcrest Lutheran Academy in 1976. The most points in a Class Nine-Man championship game were scored by Rothsay in a 64-12 win over Cotton in 1972, the first year of the League’s football state tournament. During the six-game postseason, LeRoy-Ostrander outscored the opposition, 300-50.

Fertile-Beltrami (13-1) had a record-setter as well. Junior Brayden Werpy had 197 yards on kickoff returns. That topped the old mark of 161 set by Willmar’s Ethan Roux in 2018 and is the Prep Bowl record for all returns.