Go ahead, call Dassel-Cokato’s football team ball hogs. They will gladly accept that moniker and then show you the championship trophy that goes with that strategy.

The Chargers played a masterful game of keep-away on Saturday, Nov. 27 and used it to pave the way to a 28-21 victory over Plainview-Elgin-Millville in the Class AAA championship game at U.S. Bank Stadium. Dassel-Cokato (14-0) churned out 312 rushing yards on long, sustained drives that drained the clock and put points on the board in producing the first football championship in program history. The Chargers were the Class AAA runner-up to Pierz in 2019. In the non-Prep Bowl Era, Dassel-Cokato was the Class B runner-up in 1972 in the first-ever state tournament sponsored by the League.

Dassel-Cokato held on to the ball for 32 minutes, 44 seconds of the 48-minute game. In the Chargers’ four scoring drives, they held the ball for a combined 62 plays. The shortest of those drives was nine plays.

Dassel-Cokato’s longest drive seemed to take the entire second quarter. It was a 20-play, 74-yard drive that took 9 minutes, 30 seconds off the clock and was capped by Gillman’s second touchdown that gave the Chargers a 14-7 lead. It was just six seconds shy of the longest Prep Bowl scoring drive in duration. In 1984, Stillwater had a scoring drive that took 9:36 off the clock in its 36-33 victory over Burnsville in the Class AA championship game. During Dassel-Cokato’s drive, it was 3 for 3 on fourth-down conversions. 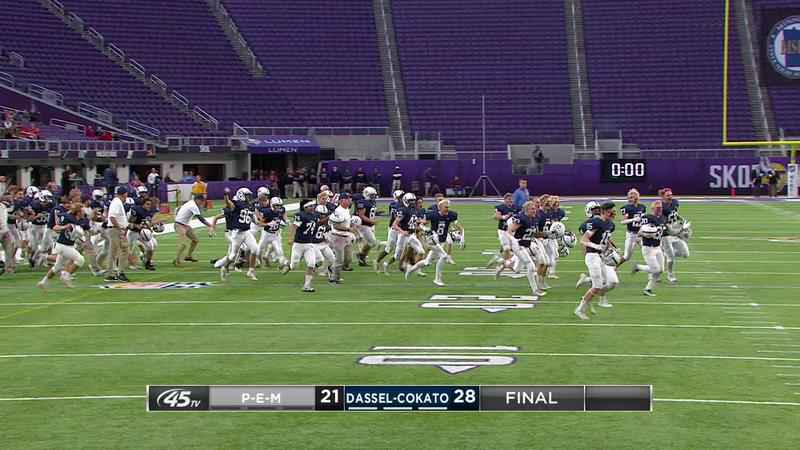 Dassel-Cokato rushes the field after a 28-21 win at the Prep Bowl.[KSTC/45TV]

Johnson’s 10-yard run with 8:28 left in the fourth quarter provided what proved to be an insurance touchdown.

Plainview-Elgin-Millville (11-3) pulled to within 28-21 with 5:12 remaining on a 9-yard pass connection from senior quarterback Connor McGuire to junior running back Hunter Tentis. The Bulldogs used an onside kick to regain possession, but it ended quickly after four consecutive pass incompletions.

Plainview-Elgin-Millville climbed into a 14-all tie at the half by using some well-planned and well-executed trickery. With the half drawing to a close and the Bulldogs trying to answer a Dassel-Cokato touchdown, McGuire hit junior wide receiver Kaden Peters on a five-yard pass. As Dassel-Cokato defenders converged on Peters, he lateraled to senior wide receiver Jason Feils at the 44, and he raced down the near sideline to lift the Bulldogs into the deadlock with eight seconds remaining in the second quarter.

Gillman opened the scoring late in the first quarter on a 1-yard run. That was a 14-play, 66-yard drive that used up 5:49 on the clock. But Plainview-Elgin-Millville answered on a 1-yard run by McGuire. McGuire completed 20 of 31 passes for 264 yards and two touchdowns.