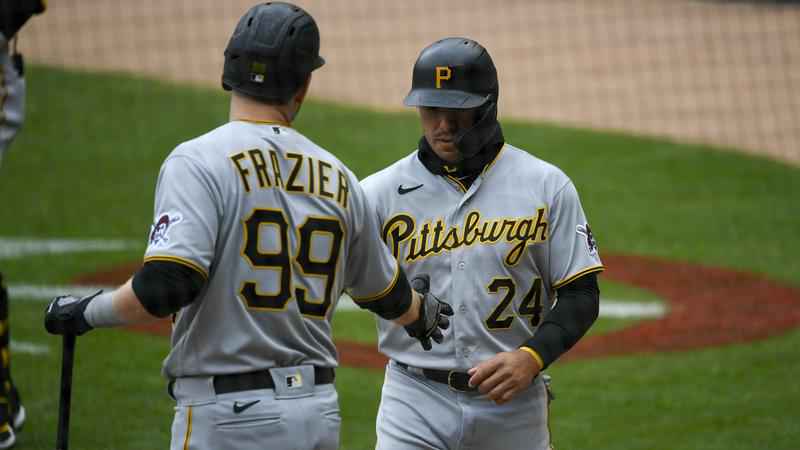 Pittsburgh Pirates' Phillip Evans, right, celebrates with designated hitter Todd Frazier after scoring on a hit by teammate Colin Moran against the Minnesota Twins during the first inning.[AP/Craig Lassig]

Gregory Polanco homered and had three hits, Clay Holmes and the bullpen held down the scuffling Twins and the Pittsburgh Pirates completed successful trip by beating Minnesota 6-2 Sunday.

Starter Wil Crow, activated before the game, allowed one run and four hits but needed 81 pitches to get through four innings.

Holmes (1-0) pitched 1 1/3 hitless innings for his first win since July 2, 2019, against the Chicago Cubs. Sam Howard got two outs, Chris Stratton allowed Nelson Cruz’s seventh homer in a three-hit eighth and David Bednar struck out two in a perfect ninth.

Minnesota has lost 11 of 13 and its seven wins are tied with Detroit for fewest in the American League.

Matt Shoemaker (1-2) allowed two runs and six hits in 5 1/3 innings. Called up from the team’s alternate training site, Cody Stashak gave up three runs in two-thirds of an inning. The right-hander has allowed seven earned runs in 5 2/3 innings this season.

Adam Frazier also had three hits for the Pirates, who have won won five of seven.

Bryan Reynolds’ RBI double and Colin Moran’s sacrifice fly put the Pirates ahead in the first. Byron Buxton’s run-scoring single cut the lead in half in the bottom of the inning, but Pittsburgh broke open the game with a three-run seventh, when Kevin Newman and Frazier hit RBI single and Reynolds hit his second RBI double.

Polanco homered in the eighth against Jorge Alcalá.

Pirates: To make room for Crowe, RHP Geoff Hartlieb was optioned to the alternate training site.

Twins: Stashak was recalled from the alternate training site to replace LHP Devin Smeltzer, who pitched 4 2/3 innings Saturday and was optioned.

Twins: SS Andrelton Simmons, out with COVID-19 since April 14, worked out again Sunday and will travel with the team for its series that begins Monday in Cleveland. “We could see him back soon,” manager Rocco Baldelli said.