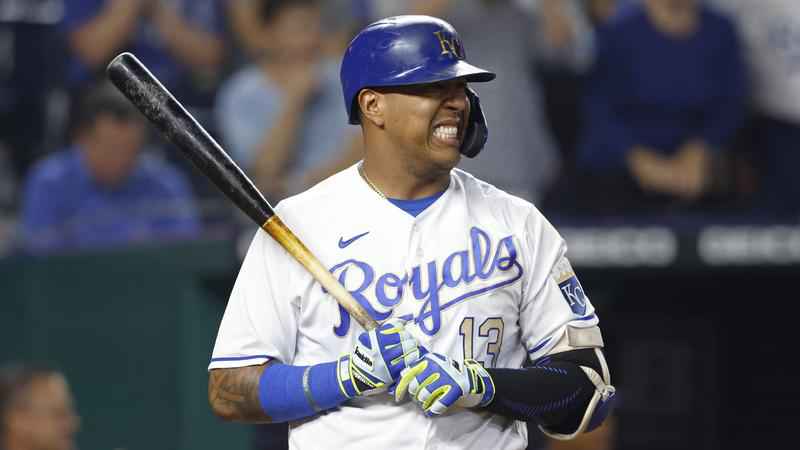 Kansas City Royals' Salvador Perez reacts after striking out in the fifth inning of a baseball game against the Minnesota Twins.[AP/Colin E Braley]

Salvador Perez went hitless on a night when every other Royals starter had at least one hit, and Kansas City Royals beat the Minnesota Twins 11-6 Friday.

With the loss, the Twins were assured of finishing in last place in the AL Central winning the division the last two years.

All the other Kansas City starters either scored or drove in a run. Hunter Dozier, who homered, and Whit Merrifield each had three hits.

Jonathan Heasley picked up his first major league win. Heasley (1-1) allowed four runs and six hits in 5 1/3 innings, with three of the runs coming in the sixth.

Merrifield led off the first with a soft single, Nicky Lopez bunted for a hit and Perez was plunked, loading the bases. A wild pitch scored a run and Carlos Santana had an RBI grounder.

The Royals added two more runs in the third and Andrew Benintendi blooped a two-run double in the fourth for a 6-1 lead.

Dozier homered in a two-run fifth that ended when Perez struck out with the bases loaded.

Ryan Jeffers led off the Twins sixth with a homer and Miguel Sano added a two-run single.

Royals C Sebastian Rivero was recalled from Triple-A Omaha. With Perez nursing a sore ankle, the Royals needed someone to back up Cam Gallagher. To make room on the roster, RHP Tyler Zuber was option to Omaha.