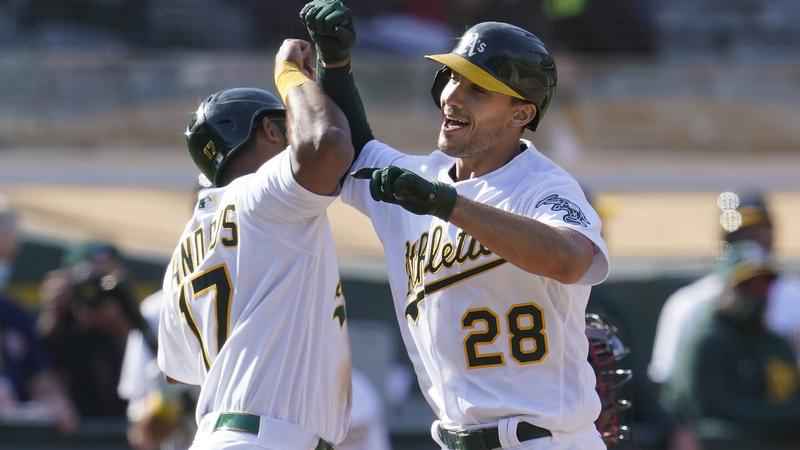 Oakland Athletics' Matt Olson (28) is congratulated by Elvis Andrus after hitting a grand slam home run against the Minnesota Twins during the fourth inning of the first baseball game of a doubleheader in Oakland, Calif., Tuesday, April 20, 2021.[(AP Photo/Jeff Chiu)]

Matt Olson hit a grand slam, Mitch Moreland homered twice to back Sean Manaea’s shutout and the Athletics slugged past the depleted Minnesota Twins 7-0 Tuesday in the first game of a doubleheader for Oakland’s ninth straight victory.

Moreland connected for a two-run homer in the second inning and a solo drive in the fourth off Matt Shoemaker (1-1).

The left-handed Manaea (2-1) allowed six hits, struck out seven and walked one over seven innings, throwing 95 pitches for his second career complete game and shutout — he no-hit the Red Sox at home on April 21, 2018.

Olson made it 7-0 with his fourth-inning slam through a blustery wind.

The A’s matched the longest winning streak in the majors this year with Boston, which won nine in a row from April 5-14. Oakland is 10-1 since starting the season 0-6.

Minnesota finally got back on the field following three postponements because of COVID-19 protocols.

The Twins’ scheduled series opener in Oakland was delayed, forcing the doubleheader. Minnesota missed games Saturday and Sunday against the Angels in Anaheim.

The Twins have had at least four positive coronavirus tests in the past week — Andrelton Simmons, Kyle Garlick, Max Kepler and a team staff member.

Minnesota, which also spent pregame time Tuesday closely monitoring the Derek Chauvin verdict back home in the case of George Floyd’s killing last year, was eager to get back to playing baseball.

During this trying stretch, the Twins also dealt with the death of bench coach Mike Bell last month.

Baldelli called this “one of the most emotional periods of time that I’ve spent in the game, and I mean that in a pretty broad-spanning way.”

“This is my first foul ball ever,” said Oakland’s Floyd.

Twins: Kepler is out with COVID-19, Baldelli said before the doubleheader. Kepler and others remain quarantined in Anaheim hotel. LHP Caleb Thielbar is there and out as a close contact. Those with positive tests are experiencing only mild symptoms, according to Baldelli.

Athletics: Oakland reinstated LHP Reymin Guduan from the injured list and he was added as the 27th man for the doubleheader. … OF Piscotty returned from the paternity list. The A’s designated OF Ka’ai Tom for assignment. “We’d like to keep him obviously but at this time there just weren’t very many at-bats for him,” manager Bob Melvin said. … LHP A.J. Puk has played catch but “hasn’t felt great yet, he’s felt some lingering stuff,” Melvin said. Puk is yet to throw off a mound as he works back from a strained biceps in his pitching arm. … RHP Mike Fiers (right hip) was set to throw for the last time with the club’s alternate site and if all goes well could be activated soon. … OF/INF Chad Pinder, sidelined by a sprained left knee, is still working to add more baseball activities.