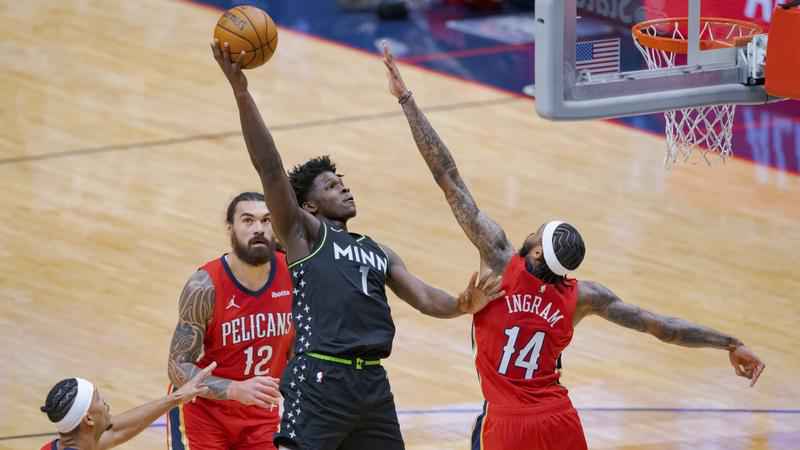 Rookie Jaden McDaniels hit his first four 3s and finished with a career-high 20 points for Minnesota, which won for just the eighth time this season — and second time against New Orleans.

Karl-Anthony Towns scored 16 points and former LSU standout Naz Reid added 15 for the Timberwolves, who combined for 19 3-pointers on 40 attempts (47.5%).

Zion Williamson scored 24 points for the Pelicans on 9-of-13 shooting. Steven Adams had 13 points and 12 rebounds and Brandon Ingram added 13 points. But the Pelicans struggled to shoot from deep, going 6 for 32 on 3-point attempts. And they compounded their problems by committing 18 turnovers, which led to 31 Minnesota points.

After Edwards’ dunk and 3 in succession gave Minnesota an 88-70 lead in the third quarter, boos could be heard emanating from the socially distanced crowd of about 3,700.

The Timberwolves kept the pressure on, building their lead to 105-82 on Nowell’s fourth 3 for the final basket of the third quarter.

The Pelicans jumped out to a 16-point lead in the first quarter, when Williamson scored 11 of his points. The All-Star got going with eight early points in the paint, highlighted by his thunderous dunk on a baseline cut.

New Orleans led 26-10 with 4:03 left in the first quarter. But the Wolves methodically rallied, helped by reserves McDaniels and Reid. McDaniels made his first five shots, including two 3s, while Reid made five of his first six attempts.

Reid’s 3 and driving layup in succession tied it at 46. A few possessions later, Edwards’ reverse layup put Minnesota up 53-48.

Towns, who’d missed his first six 3s, finally made one as time expired in the second quarter to give the Wolves a 40-point second quarter and a 67-60 lead at halftime.

Timberwolves: Towns’ buzzer-beater at the end of the first half extended his streak of games with at least one 3 to 51. … Jake Layman scored 12 points, hitting three 3s. … Minnesota got a season-high 72 points from reserves, marking the eighth time this season the Timberwolves’ bench exceeded 50 points. … The Wolves’ point total was their highest this season. … Nowell’s previous career high was 18 points.

Timberwolves: Host Portland on Saturday night in the first of two consecutive matchups against the Trail Blazers.

Pelicans: Host Cleveland Friday night in the second of three homes games in four nights. … The Pelicans have now lost five games in which they led by as many as 15 points.