Loons run unbeaten streak to 6 with fourth straight over Houston 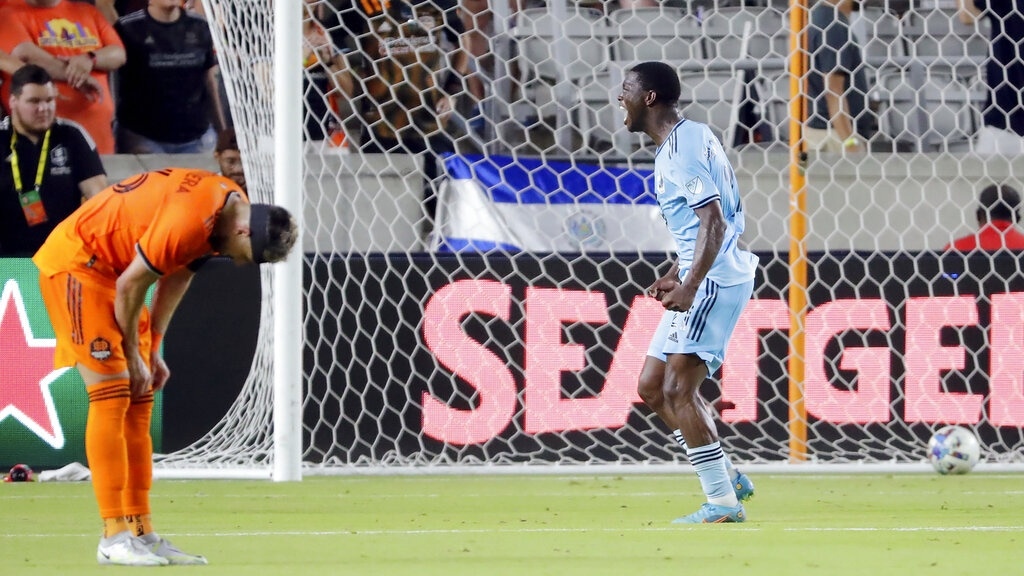 Minnesota United forward Bongokuhle Hlongwane, right, reacts to his goal as he runs past Houston Dynamo midfielder Hector Herrera, left, during the second half of an MLS soccer match Saturday, July 23, 2022, in Houston. (AP Photo/Michael Wyke)

An injury-riddled Minnesota United kept their hot-streak alive on their trip down to Space City this weekend to take on Western Conference foes Houston Dynamo FC. Despite not seeing much of the ball, the Loons were able to take down Texas’ third best MLS team by a score of 2-1. Though they started slow, MNUFC weathered the storm and took their chances when they came.

Right off the whistle, Houston looked primed and ready for this game. They came out with an energy and composure on the ball that surely encouraged the Dynamoe faithful, limiting the Loons to just about 30% possession in the opening 45 minutes.

The energetic dynamo probed and prodded the Minnesota United back line, finding that while it would bend, the Loons refused to break. Any attempt that MNUFC made to counter was smothered quickly, as Houston appeared to be everywhere at once. The absences of both Wil Trapp and Emanuel Reynoso were glaring, as their team struggled to keep possession and build any meaningful momentum.

For large portions of the half, the Dynamo were calm and in control. They isolated opposing attackers and stretched the Loons to great effect, leaving them with nowhere to go and no help to find.

Despite maintaining overwhelming possession of the ball, the home team struggled to find a breakthrough, failing to register a single shot on goal. Hector Herrera’s class was evident throughout, but his playmaking only went so far, as the players on the end of his passes continually ran into a strong MNUFC defense.

The lethargic visitors found their feet in the 30th minute, as they began applying pressure and winning the ball in the attacking third. Houston’s early dominance was fading away, leaving a more competitive match in its wake.

It looked as though the score would be level at the half, but Bongokuhle Hlongwane had other ideas. After picking up the ball past midfield, Hlongwane drove forward, weaving through Houston defenders with speed before slotting a through ball into the 18 for Franco Fragapane. The MNUFC winger’s perfect run saw him ghost behind the Dynamo defense, leave Steve Clark flailing, and finish into an open net during stoppage time. The Loons took an unlikely 1-0 lead into the break after managing just one shot on goal in the half.

When play resumed, Houston found a spark through substitute Sebastian Ferreira. The Paraguayan striker put immediate pressure on MNUFC, but All-Star keeper Dayne St. Clair came up big in the 49th minute to deny the sub. With that save, the Houston onslaught began to slow, as the game settled into a rhythm resembling the end of the first half.

For the next 20 minutes, the most notable occurrences were a Carrasquilla shot that appeared to go into orbit and the pitch seemingly turning into a slip ‘n slide, as players on both teams fell repeatedly.
In the 72nd minute though, lightning finally struck for our favorite South African international.

After receiving the ball on the right side of the box, Bongokuhle Hlongwane faked his defender, cutting in onto his left foot. From there, he unleashed a beautiful shot, finding the bottom left corner of the net for his long-awaited, well-deserved first MLS goal.

With less than 20 minutes remaining and a visibly exhausted opposition, MNUFC appeared to be ready to cruise to victory. But alas, the fat lady had not yet begun to sing.

In the 85th minute, Fafa Picault did his best Bongi impression, firing a laser into the right side-netting of the Minnesota United goal to make it 2-1. As the crowd got back on their feet, the Dynamo appeared to have a pulse after all.

Despite the late drama, there were no more answers to be found for the home side. Picault’s goal turned out to be just a consolation prize, though it did give his side a brief glimmer of hope.

When you’re playing on the road with a laundry list of injured first-team players, sometimes you just have to absorb pressure for stretches of the game. Defensive discipline is the key to success in these situations, and it was evident for the Loons tonight. A wonderful game from both Michael Boxall and Bakaye Dibassy saw them win seemingly every ball in the air, making the six an impenetrable fortress.

With this win, the Loons extended their unbeaten streak to six games, earning 16 out of a possible 18 points in that span. They continue to tighten their grip on their spot in the playoffs, and they don’t appear to be losing any momentum. Hopefully, a week off will give the squad time to rest up and see some players return from injury for the game against Portland next Saturday at Allianz Field.

“Well, we played away from home so the initiative is always going to be with the home team. Obviously chasing the game they’re going to push extra men forward, which they’ve done. I said to the players at halftime, ‘There’s going to be huge spots in this game where you’re going to have to defend for your lives,’. I don’t think people realize how difficult it is to play with the humidity. Against a team, who I told the players before the game, these are better than their points tally and their position states. I wasn’t surprised. I knew it was going to be really, really tough. I thought, considering the amount of games we’ve had in the period of the last three or four weeks and gone away to win in LA and gone away to win in Vancouver, come here and won away maybe we’ll get a little bit of credit for what we’ve been doing over the last few weeks.”

“We’ve got a really good group. There’s a real good comradery and togetherness within the group. It was a great run from Bongi [Bongokuhle Hlongwane] , beautifully timed run from Fraga [Franco Fragapane]. Then his quality came through and I’m so pleased for Bongi to get his goal because if ever a kid’s deserved a goal with the amount of work he does on both sides of the ball and if we can get him to consistently score goals from that position with the energy levels that he has to play then, as I said a few months ago when he arrived, we think there is a player there and we’ve got to give him time. I don’t think people realize what a culture shock it’s been leaving Africa for the first time. We’re delighted for him and you could see with the response of the rest of the group how pleased for him they were.”

On the importance of Bongokuhle Hlongwane having an elevated role…

“He’s got a lot to learn still and he knows that. If he keeps working as hard as he does, keeps listening to what people are telling him, keeps running forward, keeps trying to get in the right spots, which he has been doing… If he can start bringing goals to his game in the manner that say Robin Lod does when he plays there then when you get in that between seven and twelve goals a season from a wide area then that would be huge for us moving forward.”

On an update about Emanuel Reynoso’s injury…

“He’s still a little bit swollen, but he’s walking without the aid of a boot at this moment in time. We’re hopeful for next weekend.”

On Houston pushing to score at the end, and how the team remained resilient…

“I think we have such a committed group of players who are wanting to leave everything out there for each other. It’s not just the players on the field [who started] but even everyone who comes on is willing to work their butts off and ensure we get the result. I’m proud of my guys, I thought Nabi Kibunguchy was super solid tonight [in his first MLS start]. In a pretty tough place to play. And I’m super excited that Bongi [Bongokuhle Hlongwane] got his first goal. We’ve got a group of hardworking players who leave it all out there for each other.”

On players stepping up when they get their chance…

“Obviously a lot of our attack does rely on [Emanuel] Reynoso, because he’s such a magical player. When he is out injured or not on the field we’ve got players who are more than capable – as they showed tonight and as they showed against Everton. We’ve got players who are more than capable of stepping up and it shows the type of characters we have when they can go a month, two months without getting a sniff and then when they do they are more than ready and capable of coming to a difficult place to play and helping get us three points.”

On the big defensive performance at the end of the game…

“Kemar [Lawrence] got on the end of that cross and I think Dayne [St. Clair] just smothered that ball. Dayne has been voted into [the MLS All Star] game for a reason. He’s been big for us. But obviously Kemar, the way he gives his heart and soul every single night, he has been super solid ever since he came here. He’s a great guy in the locker room as well. He’s awesome to have on the team and I am glad we have him here.”

“He’s just such a fun-loving character. From my time in South Africa, you can see that those guys have a lot of rhythm. If you’ve got some spare time you can see what the South African celebrations look like. I think I got there just a little bit late trying to get a bit more out of him so I could be a part of it. Obviously super stoked for him. He’s been bright the last few weeks and hopefully that pushes him on to keep improving.”