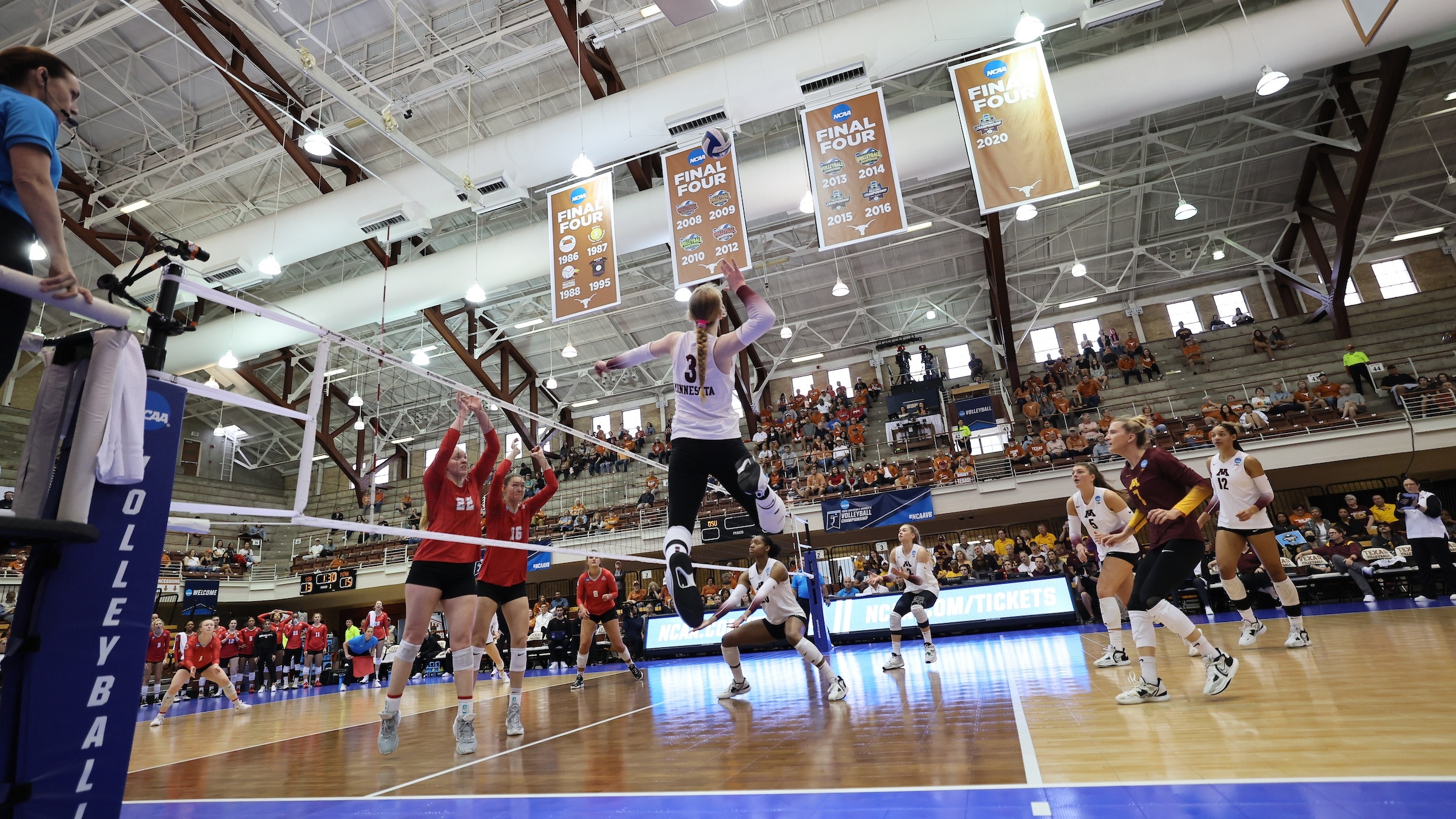 “Congratulations to Ohio State on a match well played,” said head coach Hugh McCutcheon. “I’m awfully proud of our team and thought we were really good in some spaces today. Unfortunately we just didn’t execute in other areas and came up just short.”

With the defeat, McCutcheon’s tenure with the program ends. He previously announced this would be his final season as head coach of Gopher Volleyball. He departs with a record of 277-74 and an NCAA Tournament mark of 28-10.

Taylor Landfair led the Gophers with 16 kills while Jenna Wenaas had nine with 14 digs. Melani Shaffmaster tallied 39 assists and eight digs while CC McGraw paced the backcourt with 17 digs.

“It was such a blessing to be able to come back this year and have one more opportunity with my teammates,” said CC McGraw. “To be able to go to work with this group and learn from Hugh and our amazing coaching staff for another year was amazing. It wasn’t the outcome we wanted today, but besides that, I wouldn’t change a thing. I love this team.”

Set Breakdown:
Set 1: The two teams started off dead even, with neither leading by more than one point until the Gophers broke a 9-9 tie to go up 11-9. Taylor Landfair had three kills up to that point while Melani Shaffmaster had two while Carter Booth and Arica Davis had one apiece. The Gophers went up 14-10 after a 5-1 run, getting an ace and another kill from Landfair. The Buckeyes scored three straight to cut the lead back to one at 14-13 before a kill from Mckenna Wucherer put the ‘U’ up 15-13 at the media timeout. An OSU attacking error and a kill from Jenna Wenaas put the Gophers up 17-13, forcing a Buckeyes timeout. A 3-0 run by OSU made it a 17-16 game, leading to timeout No. 1 of the set from coach McCutcheon. The Buckeyes would tie it up at 19 after a kill and a service ace. The two teams exchanged points to 20 before kills from Landfair and Wenaas put Minnesota up 22-20, leading to timeout No. 2 from OSU. After the Buckeyes tied it at 22, Minnesota called its second timeout. The Gophers would finish on a 3-0 run to win the set, 25-22, getting kills from Landfair, Wenaas and Wucherer. The ‘U’ hit .500 for the set compared to .433 for OSU. Landfair had six kills while Wenaas and Wucherer had three each.

Set 2: Minnesota picked up where it left off in set one, starting off on a 6-2 run before Ohio State called timeout. Booth had a pair of blocks early on to stymie the Buckeyes attack. OSU would respond, however, scoring seven of the next eight to go up 9-7. Kills from Landfair and Wucherer with an ace from Shaffmaster led a 4-0 run from the ‘U’ to retake the lead at 11-9. The two teams would exchange points, tying at 11, 12 and 13 before a kill and a block from Booth put Minnesota up two, 16-14. Three straight from OSU gave the Buckeyes the lead again for the first time since 9-7. Minnesota went back up one at 18-17 before another 3-0 OSU spurt put the ‘U’ down 20-18, forcing a timeout from coach McCutcheon. The Buckeyes would go up as many as four at 23-19 before Minnesota called timeout with the set on the line. OSU went on to take set two, 25-21, tying up the match at one set apiece.

Set 3: OSU and the ‘U’ split the first 10 points before a 3-0 Buckeyes spurt led by Londot put the visitors up 8-5. A kill from Wucherer and a block from Davis and Shaffmaster helped tie it up at 8-8. An ace from CC McGraw and a block from Davis helped Minnesota go up 10-8, leading to an OSU timeout. The Buckeyes tied it up with two straight before the two teams exchanged points up until 14-14. A 3-1 OSU spurt put them up 17-15, forcing coach McCutcheon to call a timeout. The Buckeyes would keep it going, taking a 22-17 lead before Minnesota called its final timeout of the set. Minnesota would cut it to two at 22-20 and 23-21, but OSU closed out the set, 25-21, going up 2-1.

Set 4: Kills from Landfair and Wenaas and an ace from Wenaas put the Gophers up 3-1 early. Four straight from OSU put the Buckeyes up 5-3 before Minnesota tied it up at five. Two kills from OSU’s Moore and a Minnesota attacking error made it 8-5 Buckeyes and forced coach McCutcheon into a timeout. The Buckeyes refused to slow down, scoring five of the next six to go up 13-6, taking control of the set. The Gophers would cut it to four at 16-12, getting kills from Landfair and Wenaas to cut the deficit. Minnesota would get no closer before OSU expanded its lead to seven at 21-14. A kill from Wucherer and a pair of Buckeyes errors made it 21-17. OSU closed it out, 25-19, to win the match.