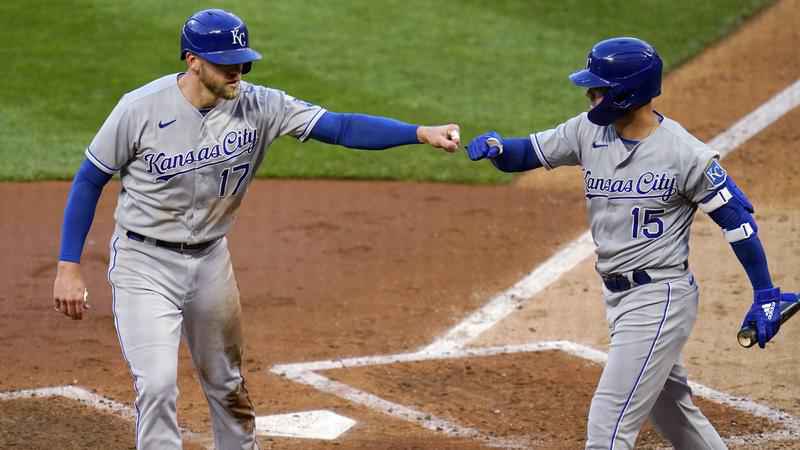 Kansas City Royals' Hunter Dozier (17) gets a fist bump from Whit Merrifield after scoring on a double by Michael Taylor off Minnesota Twins relief pitcher Randy Dobnak during the fifth inning.[AP/Jim Mone]

Merrifield had a two-run double in a five-run seventh inning as Kansas City’s offense broke out after scoring five total runs during a three-game series at Tampa Bay.

Bubic (1-0) allowed one run and four hits in six innings. In three starts after a stint in the bullpen, Bubic has allowed three runs in 17 innings.

Randy Dobnak (1-4) struggled in his second start for Minnesota, giving up six runs and nine hits in six innings. Mitch Garver hit his eighth homer of the season for the Twins, who had their four-game winning streak end.

Jorge Soler and Hunter Dozier each ended long hitless streaks for the Royals. Dozier snapped an 0-for-32 streak in his first game off the injured list with a concussion. Soler had two hits to break his 0-for-21 stretch.

Before the game, Royals manager Mike Matheny talked about getting closer to his preferred lineup with Dozier’s return and Adalberto Mondesi returning from the injured list earlier in the week. Matheny noted Soler, Dozier and Michael A. Taylor hitting in the final three spots in the order as an example of the improved depth.

Royals: RHP Josh Staumont was placed on the 10-day injured list with a left knee sprain, while RHP Carlos Hernández was recalled from Triple-A Omaha. … 1B Ryan O’Hearn was optioned to Triple-A in a corresponding move to make room for Dozier’s activation.

Twins: OF Byron Buxton is still working on his running progression as he rehabs a right hip strain. There is no timetable for a rehab assignment. … OF Max Kepler was out of the lineup as he deals with a lingering hamstring injury. Manager Rocco Baldelli said he’s picking spots to use Kepler in a limited fashion in hopes of avoiding the injured list. … RHP Kenta Maeda (right adductor strain) was scheduled to throw a light bullpen session on Friday. Baldelli said it’s still possible Maeda could return around the two-week mark after going on the injured list on May 23.

J.A. Happ (2-2, 5.44 ERA) will start Saturday afternoon for Minnesota. The Royals haven’t announced their starter. Multiple recent off days have allowed Kansas City to go with four starters while Danny Duffy is on the injured list with a left forearm flexor strain. Hernández could get the start. Happ has allowed 19 earned runs in 13 innings over his last three starts.