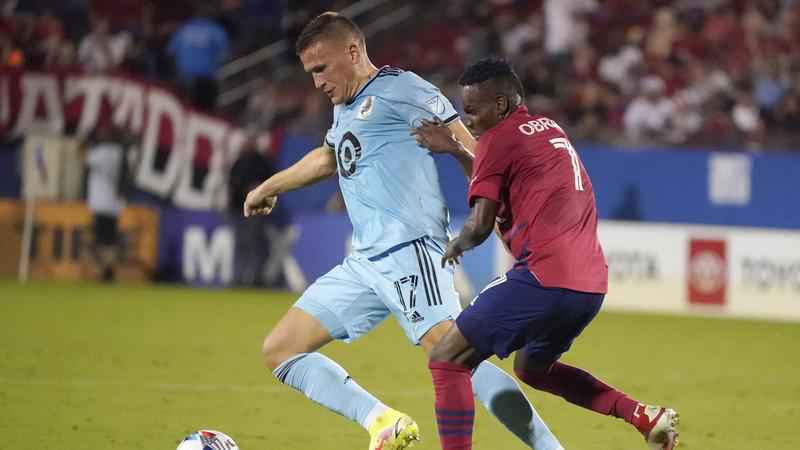 Phelipe Megiolaro had his first MLS shutout and FC Dallas tied 0-0 with Minnesota United. Tyler Miller had four saves for Minnesota (10-9-8). Dallas (6-13-10) is winless, with four losses, in its last seven games.

After a tough loss against D.C. United earlier in the week, Minnesota United headed south the mess with Texas. In the nation’s capital, the Loons sorely missed midfielder Emanuel Reynoso but the Argentine returned to the starting XI against FC Dallas as the team came out in their usual 4-2-3-1 formation.

While both teams had their chances — and Dallas had a goal called back after a handball call — both goalkeepers had outstanding games and each came away with a clean sheet in a 0-0 draw. The biggest impact of the game going forward will likely be Reynoso’s red card late in the game, which will keep him out of next week’s important matchup with the Colorado Rapids.

Both teams came out energetic and looking to force the other team’s hand early. Minnesota pressed high to try to force a turnover and Dallas tested goalkeeper Tyler Miller early from distance, with the Loons’ net minder showing he was more than up to the challenge throughout the game. Through much of the first half, the game was played on relatively even teams with the two sides more or less matching each other in chances and possession.

As halftime approached, FC Dallas shifted into a higher gear in hopes of securing a lead before the whistle. The Toros lumped the ball forward and kept Minnesota from getting comfortable on defense, but MNUFC stood their ground and kept things level headed into the break.

The home side couldn’t sustain their momentum to start the second half and Minnesota United began to chip away at Dallas’ resolve. In the 51st minute, the Loons executed a crisp counterattack off a Dallas corner kick but couldn’t quite get far enough ahead of the defense to get a clean shot and then four minutes later, Bakaye Dibassy broke free on the left wing and sent in a cross that Reynoso tried to tap in with the outside of his boot. Phelipe Megiolaro couldn’t quite get to the initial cross but he recovered well and made a diving save to push Reynoso’s shot over the endline for a corner kick.

In the 60th minute, a cross sent into Minnesota’s box was cleared by Michael Boxall, but his clearance struck Ryan Hollingshead and the ball dropped straight down to his feet where the fullback finished it off. But the play went to video review and it was determined that the ball struck Hollingshead in the arm and the goal was called back.

Looking for something different, Head Coach Adrian Heath brought in forward Fanendo Adi for Ethan Finlay, sending Lod to take over on the right wing in the 72nd minute.

Over the final 10 minutes, it began to feel like MNUFC were building towards something, with Reynoso curling in a dangerous shot on the far post that Megiloaro was just able to deflect out for a corner kick and Lod unleashed a shot from distance that the keeper had to push over the crossbar. But then all of that came to a crashing halt in the 89th minute as video review came in to check out a challenge by Reynoso on midfielder Szabolcs Schon deep on the right wing. Reynoso had stepped on Schon’s ankle and after the review, the Argentine was shown a red card.

In addition to scuppering almost any hope for three points against FC Dallas, the red card will also keep the midfielder from playing against Colorado next week — a key Western Conference matchup for which the Loons will already be shorthanded due to losing Michael Boxall, Robin Lod, Jukka Raitala and Romain Metanire to international callups.

With six minutes of stoppage time, the Loons had to batten down the hatches and hold off the home side. While Dallas got off some shots, the defense was up to the challenge and Jesus Ferreira’s final curling shot went wide as time expired with the teams splitting the points.