Marshall’s quest for an unbeaten season remained intact following a 75-58 victory over Holy Angels in the Class AAA semifinals of the girls’ basketball state tournament Tuesday, April 6 at Target Center in downtown Minneapolis. Senior guard Jordyn Hilgemann 25 of her 30 points in the second half when the Tigers (22-0) surged past the Stars (20-3) and into the Class AAA championship game on Friday.

It will be Marshall’s first trip to the state championship game since 2015 when it was the runner-up. The Tigers also had Class AAA runner-up finishes in 2006 and 2014. Marshall is seeking its first Class AAA championship since winning the second of two in a row in 2002.

Junior forward Ashleigh Steinbach added 16 points and senior forward Abby Wendorff and sophomore guard Brianna Simpson chipped in 11 each for the Tigers, who outscored the Stars 41-24 in the decisive second half. Marshall led by as many as 16 three times late in the second half, each time courtesy of free throws by Hilgemann, who took many trips to the free-throw line in the final minutes.

Senior guard Francesca Vascellaro led the Stars with 19 points, including 11 in the second half.

Senior forward Rachel Kawiecki converted on a three-point play opportunity with 0.5 seconds remaining in the first half to lift the Stars into a 34-all deadlock at the break. She finished with five points and seven rebounds in the rugged first half of play by both teams. Vascellaro led a balanced Holy Angels attack with eight points and freshman guard Jenna Buer added six. 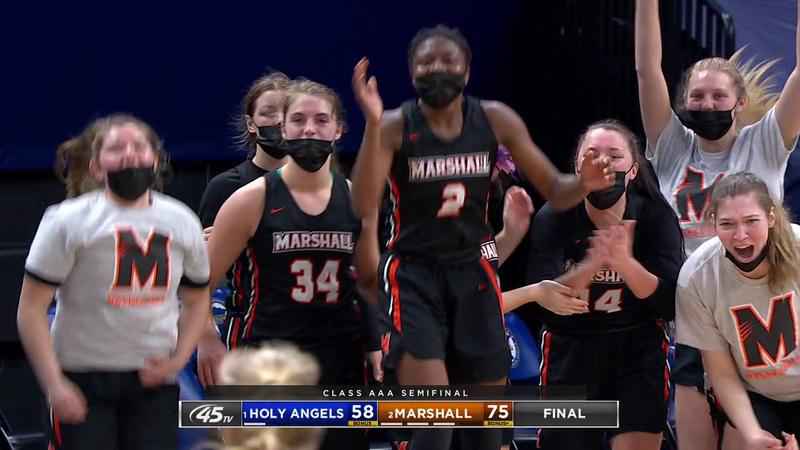 Marshall beats the Academy of Holy Angels in the Class 3A semifinals 75-58 on Tuesday night.[KSTC/Ch.45]

Marshall, which trailed for the majority of the first half, was paced by Steinbach, who had 12 points, three rebounds and two steals. Sophomore guard Brianna Simpson chipped in nine.