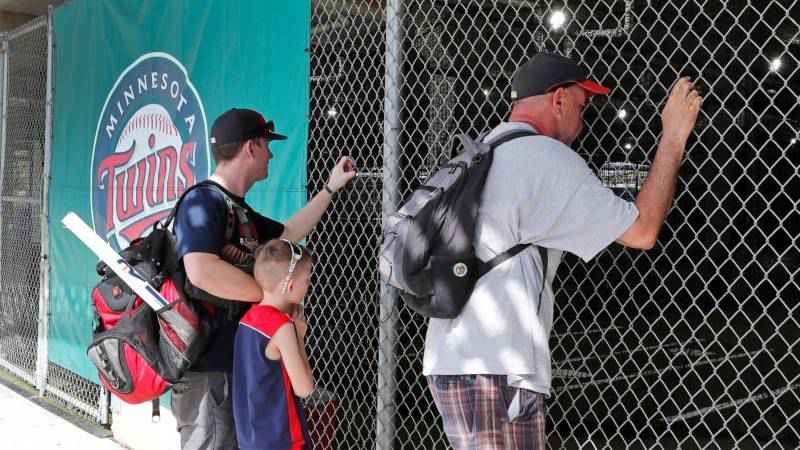 In this March 12, 2020, file photo, baseball fans look through a fence at Hammond Stadium after a game between the Minnesota Twins and the Baltimore Orioles was canceled, in Fort Myers, Fla.[AP Photo/Elise Amendola, File]

On Wednesday, the Minnesota Twins announced the club has received approval from Major League Baseball and Lee County, Florida officials to welcome a limited number of fans to Hammond Stadium for the 2021 spring training season, starting with the Twins’ Grapefruit League home opener.

Additionally, the Twins and Fort Myers Mighty Mussels, in collaboration with MLD and public health officials, will implement enhanced health and safety protocols and procedures at the CenturyLink Sports Complex adhering to requirements and guidelines established by the Centers for Disease Control and Prevention (CDC).

According to a release, slightly more than 2,400 fans per game (about 28% of the normal capacity of 8,730) can attend a Twins spring training home game at Hammond Stadium, as the club has developed a physically-distanced seating plan utilizing "pods" (sold in sets of two or four contiguous seats only) to maximize guest comfort and safety. Due to limited capacity, season and group ticket plans have been discontinued this spring. The team says existing Twins spring training season ticket holders will have exclusive access to purchase single-game tickets for the spring campaign, prior to any remaining inventory being released to the public.

The club says more information regarding when, where and how to purchase spring training tickets will be announced in the near future. Additionally, more health protocols will be detailed in the pending announcements.

“Fans are truly what make baseball great, and the Minnesota Twins are beyond thrilled to begin safely welcoming ours back into ballparks for the 2021 season, starting with spring training home games at Hammond Stadium in Fort Myers,” said club President and CEO Dave St. Peter. "The Twins, the Mighty Mussels, Major League Baseball and Lee County – our partners for 30 years – are committed to creating the safest possible environment for our guests, players, staff and employees. We are confident in the protocols and procedures we are putting into place at the CenturyLink Sports Complex, and we look forward to again seeing our fans inside Hammond Stadium for Twins Spring Training baseball."

Twins pitchers and catchers are due to report to Fort Myers on Thursday, Feb. 18, with the first full squad workout set for Tuesday, Feb. 23. The first of 16 scheduled Grapefruit League home games at Hammond Stadium is slated for Sunday, Feb. 28 against the Baltimore Orioles.