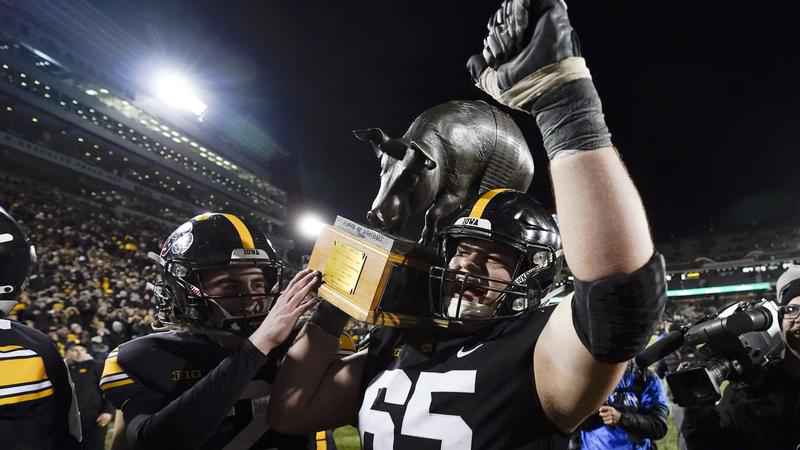 Iowa offensive lineman Tyler Linderbaum (65) carries the Floyd of Rosedale trophy off the field after an NCAA college football game against Minnesota.[AP/Charlie Neibergall]

Alex Padilla threw for two touchdowns and ran for another in his first career start, and No. 19 Iowa withstood three fourth-quarter comeback attempts to beat Minnesota 27-22 on Saturday.

The Hawkeyes (8-2, 5-2 Big Ten) led 24-16 before Minnesota’s Tanner Morgan threw a 68-yard touchdown pass to Chris Autman-Bell with 5:28 to play. The Gophers (6-4, 4-3) went for the two-point conversion, but Morgan’s pass was tipped by Iowa safety Dane Belton and fell incomplete.

The Gophers got the ball back at their own 10-yard line with 3:08 left. Morgan was sacked for a 7-yard loss on second down, and his fourth-down pass was broken up by Iowa’s Matt Hankins.

Caleb Shudak’s 29-yard field goal provided the final margin, and then the Hawkeyes’ defense bowed up one more time when Minnesota drove to the Iowa 39. The game ended with Joe Evans sacking Morgan.

Padilla’s 1-yard touchdown dive in the second quarter put Iowa up 10-3. He threw a 72-yard touchdown pass to Charlie Jones early in the third quarter to give the Hawkeyes a 17-13 lead.

Minnesota had a chance to take the lead down 17-16 to start the fourth quarter, but Dragan Kesich’s 53-yard field-goal attempt was blocked by Logan Lee. Five plays later, Keagan Johnson took a short pass from Padilla and turned it into a 27-yard touchdown.

Padilla, who took over for injured quarterback Spencer Petras in last week’s 17-12 win at Northwestern, completed 11 of 24 passes for 206 yards.

The Gophers had 189 rushing yards. That was the most this season against the Hawkeyes, who came into the game ranked eighth nationally in rushing defense at 98.6 yards per game. Ky Thomas rushed for 126 yards to lead the Gophers, who haven’t won in Iowa City since 1999.

The Hawkeyes kept Floyd of Rosedale, the bronze pig trophy awarded to the winner in the rivalry each season. The tradition began in 1935, and the Hawkeyes have a 43-42-2 edge in the series since then.

The Hawkeyes won their seventh consecutive game over the Gophers. It was Minnesota’s 10th consecutive loss on the road in the series.

The Hawkeyes are tied with Wisconsin for first in the Big Ten West, but the Badgers own the tiebreaker because of their 27-7 win over the Hawkeyes on Oct. 30. The Gophers dropped out of what was a four-way tie at the start of the day.

The Hawkeyes might move up a spot or two, but no big move is in store after they needed to hold on late against the Gophers.

Minnesota: At Indiana next Saturday.