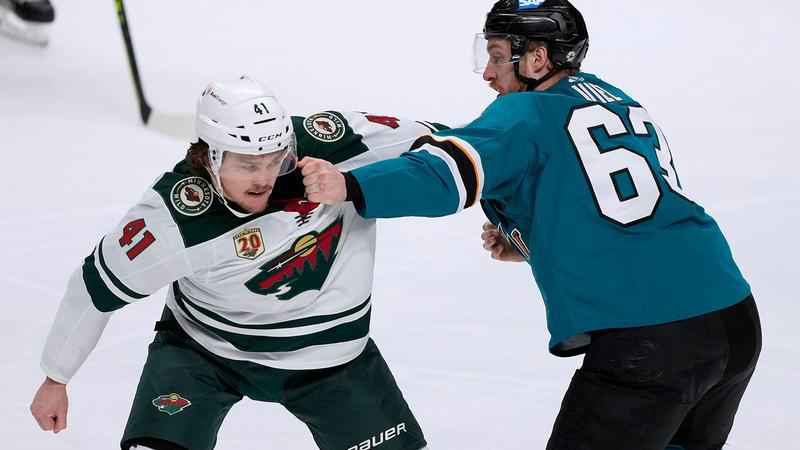 Erik Karlsson scored twice in regulation and then added the deciding goal in the eighth round of the shootout to lead the San Jose Sharks past the Minnesota Wild 4-3 on Monday night.

"We ask a lot of him," coach Bob Boughner said. "A game like tonight shows how he can make a difference in a game. He can turn a whole game around with his skill. He did that tonight."

Karlsson capped a stellar night by ending a streak of nine combined misses by both teams when he beat Cam Talbot with a slap shot.

Karlsson had his first two-goal game in the regular season in more than three years and Radim Simek also scored as the Sharks rebounded from back-to-back losses in Arizona. Martin Jones made 22 saves and allowed only two goals in the shootout.

"We all know that we didn’t really have our physical ability in Arizona this weekend," Karlsson said. "I felt like we did today even though it was a bit of a sloppy game for both teams. We found a way to capitalize on the chances we got."

Marcus Johansen, Nick Bonino and Kevin Fiala scored for the Wild, who lost for just the third time in 11 games. Talbot made 36 saves.

The teams traded goals in the first half of the third period with Karlsson giving the Sharks a 3-2 lead on a blast from the blue line and Fiala answering after Johansen hit the post.

"It was strong for us to come back in the third when they got the goal. It got us going," Johansen said. "There’s no quit in this group. It’s always a good sign. But you’re not going to win every game. (Talbott) gave us a good game and in the shootout as well. It just wasn’t our night."

Karlsson last scored multiple goals in a regular season game on Dec. 19, 2017, for Ottawa against Minnesota. He also did it in Game 3 of the Western Conference final for San Jose against St. Louis in 2019.

The Wild took nearly 11 minutes to get a shot on goal but still managed to take a 2-1 lead after the first despite getting outshot 18-7. Johansen beat Jones from the high slot through traffic for the first goal and then Joel Eriksson Ek created a beautiful second goal to re-gain the lead after Simek tied it.

Eriksson Ek used a toe drag to elude Nikolai Knyzhov and then slid a cross-ice pass to an open Bonino, who knocked it into the open net with 1:00 remaining in the period.

"That was one of the easiest ones I’ve scored," Bonino said. "It was a beautiful play."

The Sharks tied it late in the second when Karlsson finished off a 2-on-1 rush on a pass from Evander Kane.

Sharks forward Patrick Marleau passed Mark Messier and moved into sole possession of second place on the games played with his 1,757th. Gordie Howe has the all-time record of 1,767.

Sharks forward Matt Nieto will likely miss the rest of the week with a lower-body injury. Nieto has not played since March 19 and was initially listed as day to day but will now miss more time after going on injured reserve. Jeffrey Viel was called up from the AHL and made his NHL debut. Viel got a fighting penalty for a bout with Luke Johnson on his first career shift.

The teams play again on Wednesday night in San Jose.