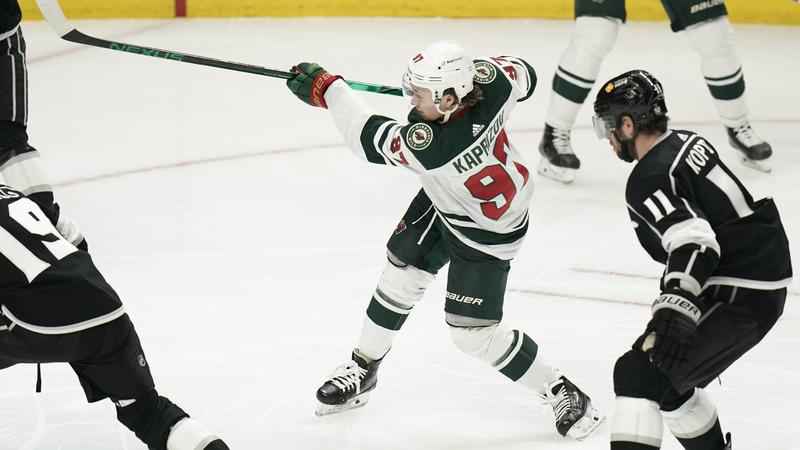 Minnesota Wild's Kirill Kaprizov, of Russia, shoots to score his second goal of an NHL hockey game during the second period against the Los Angeles Kings[AP/Jae C Hong]

Joel Eriksson Ek and Nico Strum also scored as the Wild improved to 9-2-1 in their past 12 games. Cam Talbot made 40 saves.

Trevor Moore and Anze Kopitar scored for the Kings, who have gone 26 games without consecutive wins. Cal Petersen made 20 saves.

Strum scored into an open goal to make it 3-1 at 11:19 of the third after Nick Bonino’s wraparound shot went through the crease.

The Kings had chances to tie in the closing minutes after Jonas Brodin put the puck over the glass for delay of game, but Eriksson Ek got an empty-netter at 19:50.

Kaprizov’s electric rookie season started with three points against the Kings in his NHL debut on Jan. 14, and the favorite for the Calder Trophy continued to ravage them in giving Minnesota a 1-0 lead 7:46 into the game.

It was Kaprizov’s 20th goal, the first rookie in franchise history to reach the mark. He is also the first Wild rookie to score in four consecutive games.

But the Kings tied it up 1-all with less than a second remaining in the period on Moore’s eighth goal when he buried a one-timer outside the crease.

Kaprizov put the Wild back in front 2-1 with a power-play goal at 6:41 of the second. It was his seventh power-play goal, claiming another Wild rookie record, and third multi-goal game.

Kaprizov had six goals and three assists in the eight-game season series against Los Angeles. Minnesota won each of the five games in which Kaprizov scored en route to a 6-2-0 record.

Minnesota’s special teams made the difference, going 1 for 2 on the power play and keeping Los Angeles scoreless in two chances. The Wild have the NHL’s best power play in April, leading the league in goals (16) and conversion percentage (43.2).

Wild: At San Jose on Saturday.