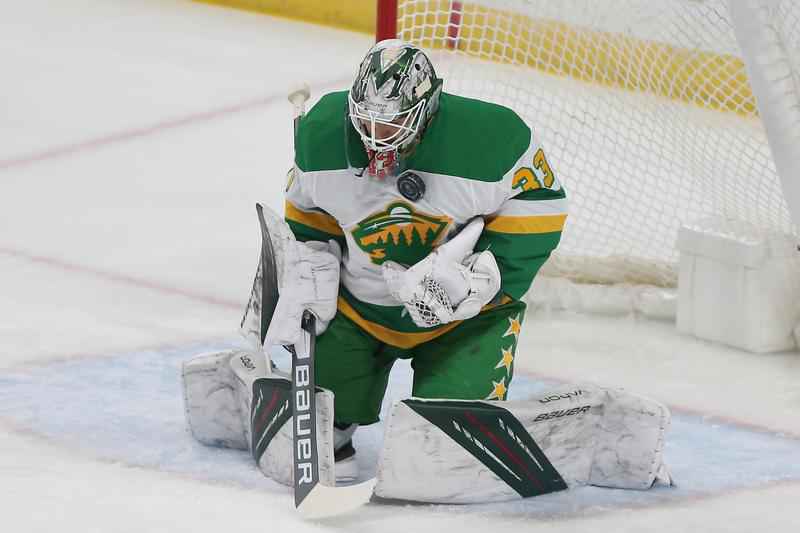 Minnesota Wild goalie Cam Talbot stops the puck during the first period of the team's NHL hockey game against the Arizona Coyotes.[AP/Stacy Bengs]

Rookie Kirill Kaprizov recorded his first NHL hat trick and Cam Talbot made 25 saves for his first shutout of the season as the Minnesota Wild beat the Arizona Coyotes 4-0 on Friday night.

Kaprizov snapped the scoreless tie 5:47 into the third period and added his second goal just over two minutes later for his first multi-goal game. He scored his third in the final seconds after Jonas Brodin added an empty-net goal.

Kaprizov has four goals in the last two games and 10 this season. The 23-year-old leads all NHL rookies in scoring this season and has helped transform the usual defensive-minded Wild into one of the league’s most dynamic teams.

Adin Hill made 28 saves in his second start of the season for Arizona.

Talbot and Hill traded save after save, holding the teams scoreless through two periods. Hill helped hold down the Wild’s struggling power play as Minnesota was issued three straight chances with the man advantage in the second period.

The young Russian, who was a fifth-round draft pick by Minnesota in 2015, has dazzled with his creativity and increased the Wild’s productivity in his first season and the first full year under coach Dean Evason.

Kaprizov corralled the puck in the left faceoff circle and spun toward the front of the net, snapping off a quick shot that deflected off Arizona forward Christian Dvorak and past Hill for the opening goal.

His second came after he cycled around the back of the net, moved out front and had another shot deflect off a Coyotes player.

Minnesota’s impressive run up the standings has come without much output on the power play. The Wild were 0 for 4 on the power play on Friday and have scored just once in their past 25 chances. They are 6 for 79 this season with the man advantage, worst in the league.

Arizona has shut down more than just Minnesota. The Coyotes have the league’s seventh-best penalty kill, but are first in the league on the road. They have allowed just four goals in 46 chances for opponents.

Marcus Foligno, who is third on the Wild with 16 points this season, left the game in the first period with an apparent right leg injury. Foligno took a shot off his right skate from teammate Jonas Brodin.

Forward Ryan Hartman was back for Minnesota after missing five games with a lower-body injury. Marcus Johansson missed his 12th straight game with an upper-body injury.

With Minnesota Gov. Tim Walz announcing loosened COVID-19 restrictions across the state, the Wild will welcome a limited number of fans back in the arena starting on Monday, April 5. Minnesota will have a maximum of 3,000 fans for the game against the Colorado Avalanche.

The Wild started their franchise history with 409 straight sellouts and had gone 203 straight regular-season games with a sellout before having the streak snapped in 2019.

“It gets old playing in front of no fans, and then when you know how good your fans are and how much they can help you, to be able to have some in a couple of weeks is pretty exciting for us,” defenseman Ryan Suter said.

Friday marked the first game of three straight between the teams, all being played in Minnesota. They resume the matchup on Sunday and follow with another game Tuesday.