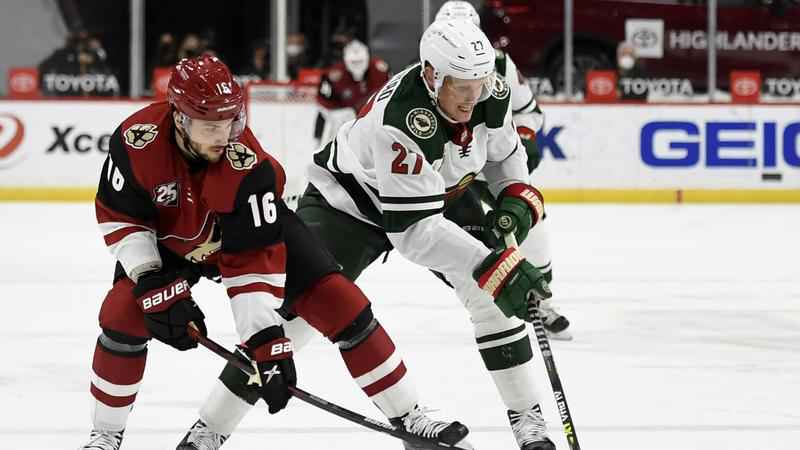 Kaapo Kahkonen made 31 saves in his second shutout of the season as the Minnesota Wild topped the Arizona Coyotes 3-0 on Tuesday night.

Minnesota swept three consecutive home games against Arizona and extended its home winning streak to eight, the longest in the NHL this year.

Adin Hill made 23 saves for the Coyotes.

Hartman scored his fourth goal 1:37 into the third straight game between the teams. The familiarity and a major penalty added to a chippy game. Carson Soucy was given a five-minute major for charging Conor Garland when he left his feet and made contact with Garland’s head.

Lawson Crouse then initiated a fight as soon as Soucy left the penalty box. Crouse was given a penalty and game misconduct for instigating. The teams combined for 47 penalty minutes but were a combined 0 for 7 on the power play.

Zuccarello got his fifth goal of the season in the third. Zuccarello missed the first 11 games with an upper-body injury, but has 19 points in 16 games since returning and has been quite the match with NHL rookie scoring leader Kirill Kaprizov to pace Minnesota’s offense.

Kaprizov isn’t the only Minnesota rookie showing well. Kahkonen’s nine straight wins are the longest streak by an NHL netminder this year and he started the day sixth in the league in save percentage and eighth in goals-against average for goalies with at least 10 games.

Spurgeon added his first goal late in the third period.

Antti Raanta, who had taken over as the top goaltender for Arizona with Darcy Kuemper injured, was held out with a lower-body injury. The team said Raanta is day to day. Ivan Prosvetov was recalled from the taxi squad to serve as Hill’s backup.

Niklas Hjalmarsson returned after missing one game with an upper-body injury. Arizona also recalled Hudson Fasching from the taxi squad to play in Tuesday’s game. Michael Chaput was assigned to the taxi squad.

Coyotes: Continue their seven-game road trip Thursday at Anaheim where they play two games against the Ducks.

Wild: Travel to Colorado for a pair of games starting Thursday. The teams have split four meetings this season.