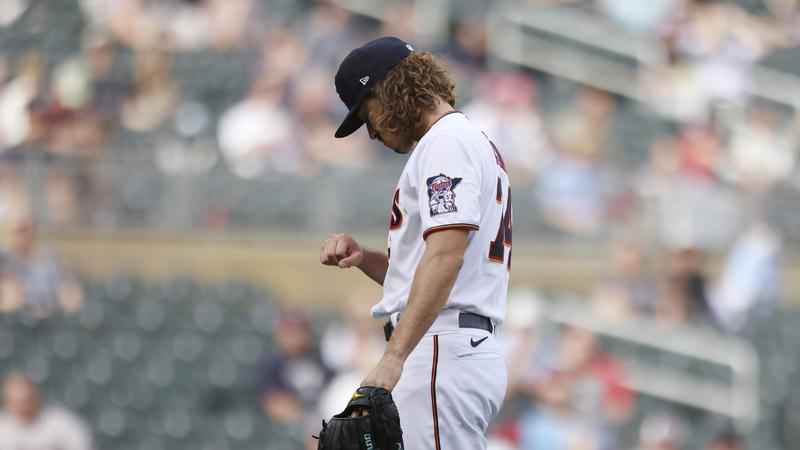 Minnesota Twins' pitcher Joe Ryan (74) looks at his wrist while walking off the field after getting hit by line drive from Cleveland Indians' Myles Straw (7) during the sixth inning of the first baseball game of a doubleheader Tuesday, Sept. 14, 2021, in Minneapolis. Cleveland won 3-1.[(AP Photo/Stacy Bengs)]

Triston McKenzie turned in another stellar start for Cleveland, cruising through six innings of the first game of a doubleheader to lead the Indians past Minnesota 3-1 on Tuesday after a comebacker off the wrist of Twins rookie Joe Ryan sidelined one half of the pitching duel.

McKenzie (5-6) had seven strikeouts, with three on Byron Buxton, with just three hits and one walk allowed to record his fifth straight outing of six innings or more and one run or less.

The 24-year-old right-hander trailed after an RBI double by Andrelton Simmons in the third, but Bradley Zimmer tied the game in the fifth with a home run off the shutters fronting the parking ramp behind the second deck in right field.

Ryan got right back to work after that, but he was forced out in the sixth when leadoff man Myles Straw smashed a single off the throwing arm of the 25-year-old right-hander, making his third big league start. Ryan knew right away he was hurt, stalking off the mound and going straight to the dugout where he slammed his glove in frustration.

Manager Rocco Baldelli said Ryan had a bruise and that X-rays on the wrist revealed no break. Ryan gave up three hits and one walk with four strikeouts, throwing 50 of 67 pitches for strikes.

Austin Hedges hit a go-ahead RBI double in the seventh against Danny Coulombe (3-2), and a fielding error on third baseman Luis Arraez off a sharp ground ball by pinch-hitter Yu Chang yielded an insurance run for closer Emmanuel Clase, who recorded his 23rd save in 27 chances with a perfect seventh.

Ryan beat McKenzie in Cleveland last week, taking a perfect game into the seventh inning of a 3-0 victory by Minnesota.

Acquired from league-leading Tampa Bay on July 22 for star slugger Nelson Cruz, Ryan has deftly slid into the rotation after helping the U.S. win a silver medal at the Tokyo Olympics and then making two starts for Triple-A St. Paul.

Ryan has the stuff and swagger to quickly become a fan favorite, with his long, thick, curly brown hair flowing out from under his cap and throwback mustache enhancing his commanding presence on the mound.

There’s no more meaningful aspect of September games for out-of-contention teams like these than taking a closer look at young starting pitchers like Ryan. For the Indians, McKenzie sure looks like a keeper, with his control refined and confidence sharpened during this late-summer run.

THE BIEB IS ALMOST BACK

Speaking of starting pitching, Indians RHP Shane Bieber — the reigning AL Cy Young Award winner — was set to begin a rehab assignment with a 50-pitch-or-so start on Tuesday night for Triple-A Columbus. Bieber has been out for more than three months by a strained throwing shoulder.

“We expect for him to kind of ramp up his volume and also his intensity,” acting manager DeMarlo Hale said. “He’s pitching against another team. That’s a good sign.”

Indians: C Roberto Pérez (right shoulder inflammation) was reinstated from his second stint on the injured list this season and slated to take the second game behind the plate. Pérez missed the last six weeks. C Ryan Lavarnway was designated for assignment to make room.

Twins: RHP John Gant was placed on the injured list with a left abdominal strain that forced him out of his start against the Yankees in the first inning on Monday. LHP Andrew Albers was recalled from Triple-A for the third time in less than four weeks.