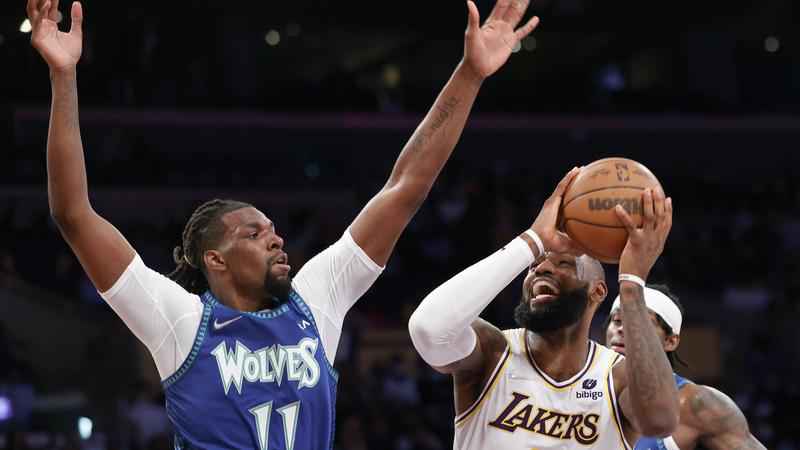 LeBron James scored 26 points, Malik Monk added 22 and the Los Angeles Lakers hung on to beat the Minnesota Timberwolves 108-103 on Sunday night for the first time in three meetings this season.

A couple of streaks came to an end in the Lakers’ first game of the new year: James’ run of seven straight games with at least 30 points and Russell Westbrook’s stretch of four straight triple-doubles. Westbrook finished with 20 points, three rebounds and five assists.

Naz Reid led the Wolves with season highs of 23 points, making 10 of 17 from the floor, and 11 rebounds. Jaylen Nowell added 17 points off the bench.

The Lakers’ veterans carried them in the fourth quarter. Carmelo Anthony scored five in a row to help erase a four-point deficit. Clinging to a one-point lead in the final minutes, Anthony hit a 3-pointer, got fouled and made the free throw. He finished with 14 points.

Avery Bradley beat the shot clock to extend the Lakers’ lead to 105-100.

The Lakers closed last year with a 33-point rout of Portland only to start the new year being challenged throughout by the Wolves, who dropped their third in a row and fifth of six.

The Wolves won the teams’ first two meetings by 24 and 18 points, with James missing the second game.

Anthony Edwards scored 18 points for the Wolves in his return from reconditioning after being in COVID-19 protocols.

The teams traded leads throughout the fourth, with neither leading by more than seven.

Malik Beasley and Patrick Beverley hit back-to-back 3-pointers as part of an 8-0 run early in the third that gave Minnesota a six-point lead.

The Lakers blew all of a 10-point lead in the second, allowing a 9-0 run by the Wolves that tied it 45-all. Reid scored 11 points in the quarter, including back-to-back dunks, and his three-point play left the Wolves trailing 57-54 at the break.

Timberwolves: Karl-Anthony Towns and D’Angelo Russell are close to getting out of the league’s health and safety protocols and could return later this week.

Lakers: James played in his 1,336th NBA game, passing Gary Payton for 16th on the career list. … They improved to 19-19. … Rajon Rondo is inactive and wasn’t with the team. The four-time All-Star guard is expected to be shipped to Cleveland in exchange for guard Denzel Valentine once the deal is approved by the NBA.

Timberwolves: Stay in LA to play the Clippers on Monday and complete the back-to-back.