Hopkins’ Bueckers leads No. 2 UConn past No. 1 South Carolina 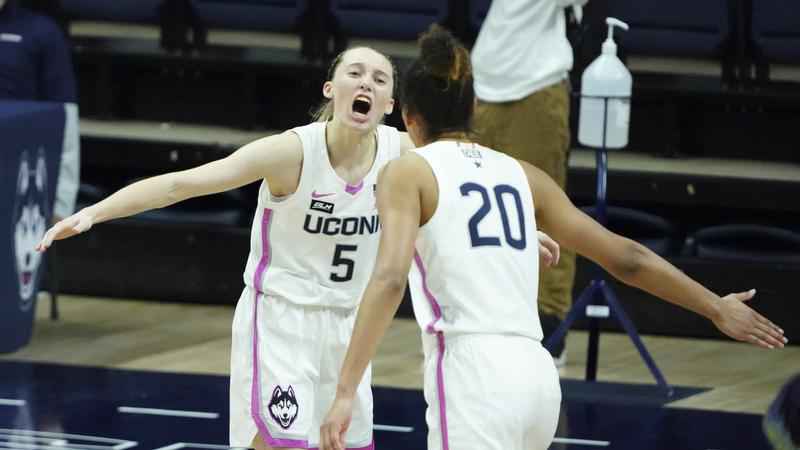 Hopkins grad Paige Bueckers scored 31 points, including her team’s final 13, to lead No. 2 UConn to a 63-59 overtime victory Monday over top-ranked South Carolina.

The freshman scored all of the Huskies’ nine points in overtime, including a 3-pointer that bounced high off the back of the rim before dropping in to give the Huskies the four-point margin with 10 seconds left.

The Gamecocks’ Zia Cooke and Destanni Henderson missed 3-pointers in the final seconds.

The thriller came just hours after the Gamecocks and Huskies earned the top two spots in The Associated Press women’s college basketball poll.

Aliyah Boston had 17 points and 15 rebounds for South Carolina (15-2), which overcame a seven-point deficit in the fourth quarter.

A layup by Aubrey Griffin had given the Huskies a 50-43 lead with just over 8 minutes left, before South Carolina turned up the defense and went on an 11-0 run.

Victaria Saxton’s layup over Nelson-Ododa gave the Gamecocks a 52-50 lead, and Boston’s jumper extended that to 54-50 with just under 2 1/2 minutes to play.

But Bueckers hit two straight jumpers to tie the game at 54 with 46 seconds left in regulation.

Henderson missed a fall-away jumper with 4 seconds left and the Gamecocks missed three chances to tip-in a game winner.

South Carolina: The Gamecocks have faced eight ranked opponents this season, with their only other loss coming on Dec. 3 against North Carolina State. The program lost the first eight meetings with the Huskies before blowing out UConn last year, 70-52 at home.

South Carolina: The Gamecocks, who have played four road games in their last five, host Missouri on Thursday night.