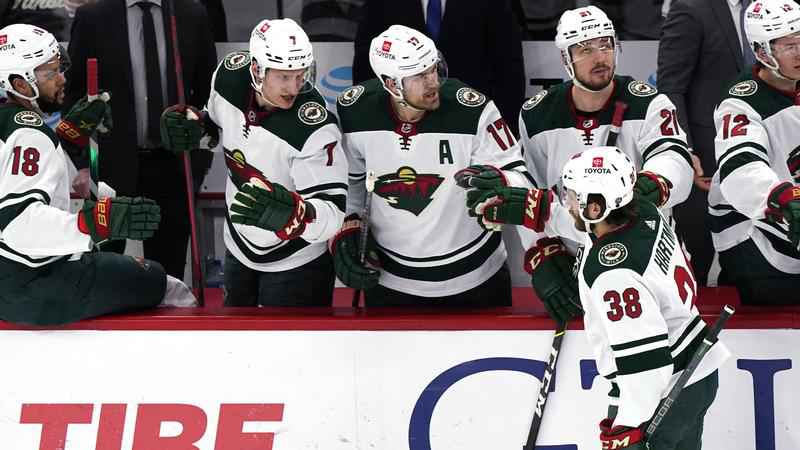 Minnesota Wild right wing Ryan Hartman (38) celebrates with teammates after scoring a goal against the Chicago Blackhawks during the first period of an NHL hockey game.[AP/Nam Y Huh]

Ryan Hartman scored twice, Marcus Foligno had a goal and an assist, and the Minnesota Wild beat the Chicago Blackhawks 5-1 on Friday night.

Calen Addison and Brandon Duhaime also had goals for Minnesota, who won for the fourth time in the last five games.

Kappa Kahkonen stopped 35 shots for Minnesota, but didn’t face many difficult challenges beyond Dylan Strome’s goal with 5:03 to play. He was at his best while turning back Kirby Dach’s difficult wrist shot and Alex DeBrincat’s close-in drive, which he gloved, six minutes into the third period.

The Blackhawks dropped their second straight after winning four in a row.

The Wild generally toyed with the Blackhawks from the start. Foligno opened the scoring with a redirect of Addison’s hard pass from right wing 2:58 into the game, and the Wild built their lead from there.

Hartman, who grew up in Chicago’s suburbs and was drafted by the Blackhawks in 2013, scored Minnesota’s second and third goals. He banged a rebound off the crossbar and goaltender Marc-Andre Fleury’s right hip at 4:58 for a 2-0 lead, and whistled a snap shot under Fleury’s right armpit with 2:48 left in the first.

Fleury allowed a fourth goal on Minnesota’s 13th shot when Addison beat him from the right point 12:05 into the second. That prompted Blackhawks coach Derek King to pull Fleury for Kevin Lankinen, the likely starter in Saturday’s rematch in St. Paul, Minnesota.

Lankinen made four saves before Duhaime whistled a screen shot past him with 3:34 left in the second, giving the Wild a 5-0 advantage.

NOTES: Thanks to COVID rescheduling, the Blackhawks and Wild hadn’t played each other since Feb. 4, 2020. … Minnesota had 30 shots on goal. … Neither team scored on the power play. … Blackhawks D Riley Stillman was favoring his left shoulder with 3:10 left in the second period after checking Kevin Fiala and didn’t return. There was no immediate word on his status for Saturday. … Midway through the first period, Minnesota’s Connor Dewar and Chicago’s MacKenzie Entwhistle were ejected for staging the second fight after a stoppage. They dropped the gloves while Duhaime and Stillman were throwing punches. … Joel Eriksson Ek returned to Minnesota’s lineup after five games on the COVID protocol list.

The Wild then host Montreal on Monday night. The Blackhawks’ trip to Minnesota is the first of a three-game road trip, which includes games at Colorado and Detroit.