The last few years, St Paul’s Humboldt High went into each football season wondering if they’d have enough players to field a team. Even once they mustered enough bodies to practice and play, there was still uncertainty from game to game.

Short rosters meant short benches, which meant dealing with injuries that shortened the roster and bench even further – often leading to forfeits.

"Last year, there would be a game and they would be way bigger than us, you know, have way more numbers. You’d get to the game like, ‘Oh, it’s gonna be a rough day’," said Humboldt senior Michael Casarez-McCampbell. "It was super-exhausting. You had to play every snap, every play. People had to play every kickoff."

Meanwhile, a roster shortage was happening on the east side of St. Paul, too. Harding High’s numbers weren’t down quite as badly but were also wavering – hampered by a 28-game losing streak that finally ended last season with a win over, maybe not coincidentally, Humboldt. 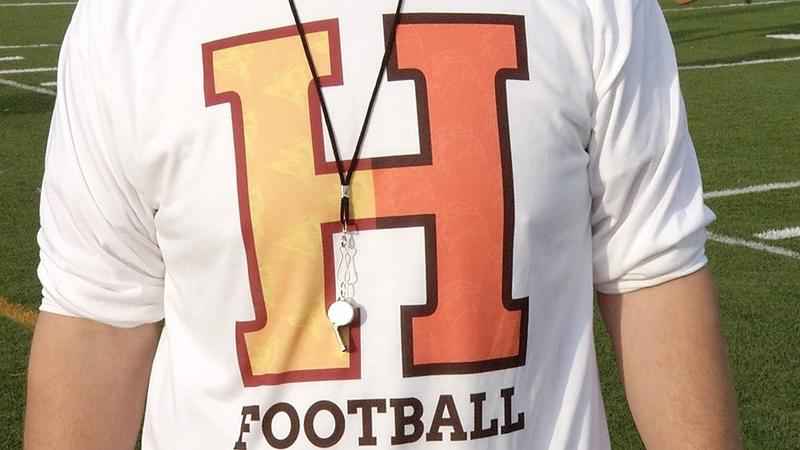 "We were asking kids that are ninth graders and tenth graders come up and play varsity and it’s not a safe situation," said Harding head coach Otto Kraus.

With both programs facing an uncertain future, they decided to merge for the 2021 season with Kraus serving as head coach of the new co-op.

Naturally, there were growing pains.

On the field, former rivals had to learn to work together.

"It was difficult at first," Casarez-McCampbell said, "But then the more we practiced together and we talked together and messed around. We created a strong bond."

That bond has grown despite the five miles and Mississippi River that separate the two schools.

"We have the east and the west side of St. Paul," Harding senior Mesai Smith-Brewer explains. "They’re on the west side so … it’s kind of like a rivalry. I probably would have never talked to them until now. But now I see that they’re just kids in this case saying ‘I love playing football’, so it’s like we’re all just friends."

Off the field, the coaching staff had to make sure players from one school could make it to the other for practice, and they needed to make sure there was enough practice and game gear to outfit the new team.

You can still spot a blend of Humboldt’s orange and Harding’s red on the practice field, and there are daily challenges to make sure players have a way to make the commute back across the river after practice, but this union of former rivals appears to be a resounding success.

"We were struggling to get 30-40 kids out each year and Humboldt ended with about 15 kids at the end of last year," Kraus said.

The merger now allows a JV team – something neither program had for years – and the newly-created depth on varsity allows most players to focus either on offense or defense and play at a level suited to their ability, rather than nearly every player having to play both ways at the varsity level.

"Knowing we can give teams competition every time we go on the field is an amazing feeling," Smith-Brewer said.

Players no longer trudge onto the field each week dreading the worst.

"Since we don’t have to play every position? It’s fun now," Casarez-McCampbell said. "You have so much breath. You get so much so much time to chill. We get a lot of subs… and everybody’s hyped."

Neither program had a winning season in at least a decade and each endured three painful winless 0-8 seasons over the last six years.

This fall, a three-game win streak already has them 4-2 this season – entering Thursday’s game at Brooklyn Center. They have a chance at both a winning season and a win total that would surpass any single season in either program’s recent history.

But it was after a defeat that Kraus truly noticed a sign of real progress.

"We lost a close game to Minneapolis South," Kraus explains. "But the expectation that they had was to go and be successful.

The players have also united behind a new nickname for their unified squad. Taking the "H" from both schools names and their respective "Knights" and "Hawks" mascots – they now rally behind being "H-Town Knighthawks".

"It’s an amazing name," Smith-Brewer said. "Yeah, I love ‘H-Town Knighthawks’. It’s a great way to combine both teams and make some unity in the community."

The blended logo that adorns the Knighthawks’ helmets and apparel features an "H" shaded half orange, half red.

"To have two schools that were rivals at one point come together and then create a family?" Casarez-McCampbell said. "I think that’s very, very cool."

Each school even got to have its own Homecoming. Harding’s stadium serves as the Knighthawks’ primary practice and game field, but a last-minute schedule change prompted a game against Minneapolis Roosevelt to move. It landed at Humboldt’s stadium, during what had already been scheduled to be Homecoming week at the school. Harding had already planned to host Homecoming at their school later in the season, so they decided to just have two of them.

It’s a tradition Kraus hopes to keep in place in future seasons. Two annual Homecoming games, one at each school.

Red or orange, Knight or Hawk, Eastside or Westside… they’ve come together as one.

That’s a reward that reaches far beyond winning football games.

"It has really been a privilege, honestly, to be able to teach and coach unity in a time where there maybe isn’t enough unity," Kraus said. "I just couldn’t be more pleased to be in the position that we are right now.

"I’ve had so many wonderful comments from alumni and from people at the different schools. We’re rocking the ‘H-town’ how we have. We’ve sort of formed our identity around each town, and it’s hard for me to express how proud I am of the kids and the communities for coming together."