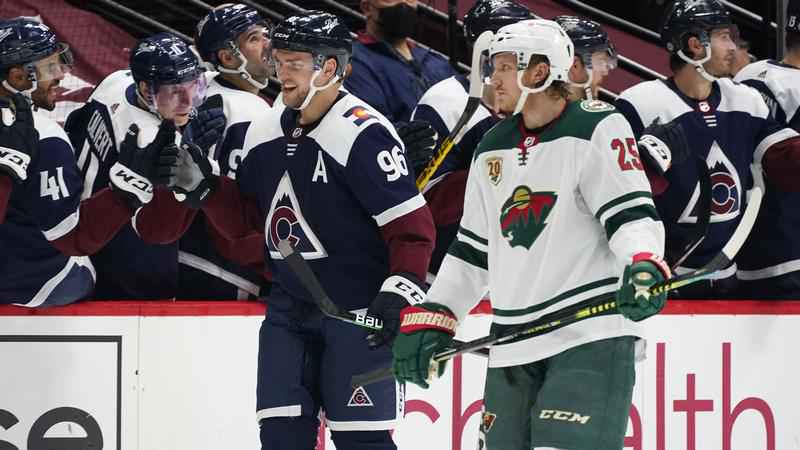 Colorado Avalanche right wing Mikko Rantanen, front left, smiles as he is congratulated while passing the team after scoring a goal as Minnesota Wild defenseman Jonas Brodin looks on in the second period.[Associated Press]

Philipp Grubauer made 31 saves, Gabriel Landeskog had a goal and two assists, and the Colorado Avalanche beat the Minnesota Wild 6-0 on Saturday.

Grubauer completed his fifth shutout of the season and the 16th of his career. The 29-year-old tied his career high with his 18th win.

Wild defenseman Matt Dumba was scratched with a lower-body injury suffered when he went into the boards skates first Thursday night in a 5-1 loss to Colorado. Minnesota coach Dean Evason said Friday the injury “is better than it looked.”

Minnesota came to Denver on a roll but was dominated in two losses. The Wild were outshot 97-51 in the two games and outscored 10-1 to fall three points behind the Avalanche in the West Division.

Makar and Landeskog scored in the first period to give Colorado the early lead. Rantanen scored his 17th of the season 46 seconds into the third, Jost added his second at 1:53 and Toews scored at 18:47 to make it 5-0. Nichushkin scored in the third.

Before the game, Colorado acquired Jonas Johansson from the Buffalo Sabres to stabilize its goaltending. Johansson was 0-5-1 in seven games for the Sabres this season, with a 3.79 goals-against average and an .884 save percentage.

The Avalanche have relied heavily on Grubauer with Pavel Francouz on the long-term injury list and Hunter Miska struggling.

NOTES: Minnesota D Carson Soucy returned to the lineup after serving a one-game suspension for a hit against Arizona on Tuesday night.

Avalanche: At Arizona on Monday night.