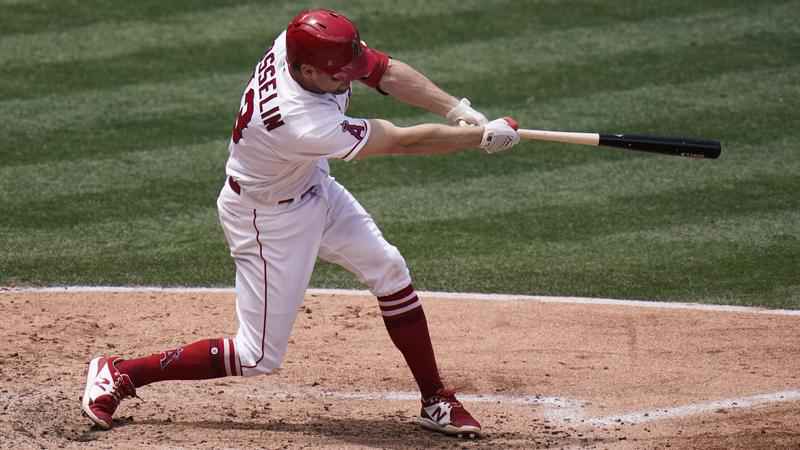 Los Angeles Angels' Phil Gosselin hit a three-run double during the second inning of the first baseball game of a doubleheader against the Minnesota Twins.[AP/Jae C. Hong]

Phil Gosselin homered and hit a three-run double in the first two innings, and Alex Cobb pitched five strong innings in the Los Angeles Angels’ 7-1 victory over the Minnesota Twins on Thursday in the first game of a makeup doubleheader.

Taylor Ward added a two-run homer for the Angels in the opener of a doubleheader necessitated by a COVID-19 outbreak among the Twins while they were in Anaheim last month, forcing the postponement of two weekend games.

Cobb (2-2) yielded four hits and a run in his first start since missing 14 games with a blister on his right middle finger. Cobb, who was pulled after just 57 pitches, has allowed just one earned run over 10 innings in his last two starts.

Rob Refsnyder drove in the only run for the Twins, who have lost nine of 11. There were forced to fly from Minneapolis to Orange County and back to Cleveland in a rough two-day span.

Anthony Rendon also got a break by serving as the Angels’ designated hitter.

Gosselin hit his first homer for the Angels in the first inning, but Miguel Sanó singled and scored for Minnesota in the second on a sacrifice fly by Refsnyder, who is from nearby Laguna Hills.

Gosselin cleared the bases in the second with a double over Luis Arraez in left. Gosselin’s four RBIs matched his career high set Sept. 1, 2015, for Arizona at Colorado — also in the first game of a doubleheader.

Ward hit his third homer of the season off Tyler Duffey in the fifth, and Juan Lagares added an RBI double.

Ohtani got his first day off of the season after pitching into the fifth inning and going 1 for 3 at the plate Wednesday against Cleveland. Ohtani’s velocity was noticeably down on the mound, although the two-way star refused to attribute it to fatigue from overwork.

Minnesota manager Rocco Baldelli will miss the second game of the doubleheader under suspension after reliever Tyler Duffey threw behind the White Sox’s Yermín Mercedes on Tuesday. The Twins apparently were responding to Mercedes’ homer on a 3-0 pitch while Chicago had an 11-run lead a day earlier.

Duffey was given a three-game suspension, but he appealed, which allowed the Angels to pound him for four hits and three runs in the fifth.

Twins: RHP Kenta Maeda, who has a minor groin injury, and the players on Minnesota’s injured list didn’t make the one-day trip to the West Coast. Maeda might start Saturday in Cleveland. … Byron Buxton (hip) has started doing light running.