After leading at halftime, the Gophers fell to No. 4 Ohio State Thursday night in Minneapolis, 45-31.

The Gophers were probably never going to have a better opportunity to topple the mighty Buckeyes than this, fielding one of the most experienced teams in the country at home — and at night — to open the season against a newbie quarterback.

With fans allowed back in the seats at what’s now called Huntington Bank Stadium, after the virus emptied them out for an abbreviated 2020 schedule, Minnesota enjoyed its third straight sellout dating to the Penn State and Wisconsin games in November 2019. 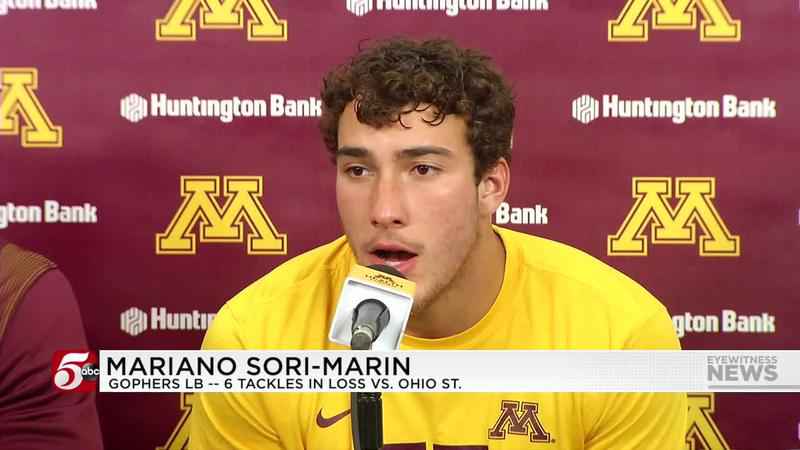 Already a time-of-possession team, the Gophers needed to play keep-away more than ever to make this a game. They were tentative at times but bold at others, including a fourth-and-1 play from deep in their own territory when Ibrahim ripped off a 56-yard run.

That set up a touchdown throw by Morgan to Texas A&M transfer Dylan Wright, who had five catches for 57 yards.

“I was really proud of how we responded,” Morgan said. “We’ve just got to keep responding and change our best.”

More painful for the Gophers than their fade down the stretch was the loss of star running back Mo Ibrahim, who hurt his lower left leg late in the third quarter and left the field in a walking boot.

The second team preseason Associated Press All-American had 30 carries for 163 yards and two scores, both giving the Gophers the lead and the first one after Terell Smith intercepted an off-target pass by Stroud that hit Olave’s hand.

Coach P.J. Fleck had no update on Ibrahim’s status afterward but said the bruising fifth-year running back from Baltimore, who moved into a tie for fourth place on the program’s all-time list with his 33rd career touchdown, was in good spirits.

"Hopefully it’s nothing major, but we don’t know that just yet," Fleck said.