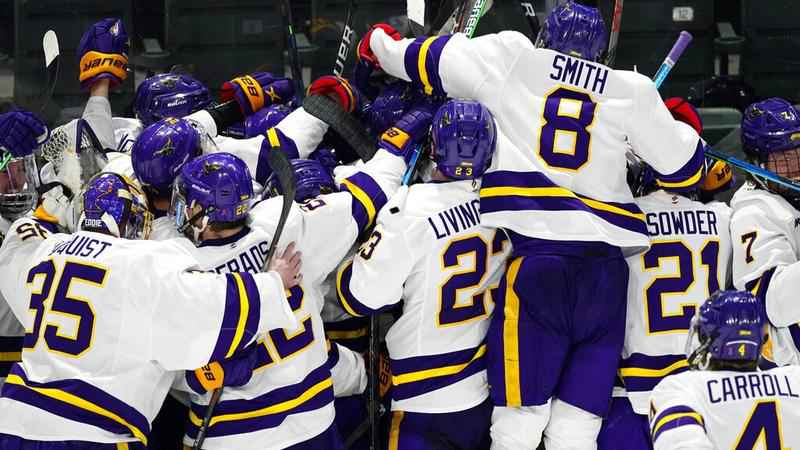 After all five Minnesota Division-I men’s hockey teams qualified for a single NCAA Hockey Tournament for the first time, all five played one-after-another in a wild Saturday that wasn’t resolved until the early hours of Sunday morning.

The biggest drama came last as Minnesota-Duluth and North Dakota played the longest game in the history of the NCAA Men’s Hockey Tournament – running a total of 142 minutes, 13 seconds.

UMD freshman Luke Mylymok scored the game-winner 2:13 into the fifth overtime for a 3-2 win that advances the two-time defending national champion Bulldogs to their fourth consecutive Frozen Four.

UMD led 2-0 with two minutes left in regulation before North Dakota scored twice with their goalie pulled to send the game to overtime.

The Bulldogs appeared to have won the game in the first overtime, but video replay took the apparent game-winning goal off the board due to a player being offside.

Three other ‘State of Hockey’ teams won games Saturday, giving them a chance to join Minnesota-Duluth in the Frozen Four.

Ryan Sandelin, whose father Scott coaches Minnesota-Duluth, scored in overtime to give the Mavericks a 4-3 win over Quinnipiac.

The Mavericks advance for the first time in their sixth trip to the NCAA Tournament. They will play a Regional Final against the Minnesota Gophers at 7:00 p.m. CT Sunday with a Frozen Four spot on the line.

Minnesota advanced with a 7-2 blowout of Nebraska-Omaha. Freshman Mason Nevers scored the first two goals of his season to help the Gophers advance.

The game was tied 2-2 in the second period before the first of Easton Brodzinski’s two goals launched a run of four unanswered by the Huskies to close it out.

With Minnesota-Duluth advancing and Minnesota and Minnesota State playing against each other, the state is guaranteed to comprise at least half the Frozen Four. St Cloud State can make it three of four.

Bemidji State had a chance to potentially fill the entire Frozen Four with Minnesota teams, but after upsetting top-seed Wisconsin in Friday’s Regional Semifinal, the Beavers lost 4-0 to Massachusetts on Saturday.