Gophers enjoy playing in trophy games like Saturday at Iowa

The Gophers will head to Iowa City this weekend to face the Iowa Hawkeyes for the right to claim the Floyd of Rosedale trophy. The Gophers haven’t won at Iowa since 1999.

"This is a rivalry game. This is what you come to the Big Ten for, especially at Minnesota. We play for four rivalry trophies. This has always been a big one for us," said Gophers DE Boye Mafe.

***To see extended interviews with the Gophers, CLICK PLAY ABOVE***

This is one of the top trophy games in the country. The Minnesota/Iowa game dates back to 1891.

Currently, the Gophers lead the series against Iowa 62-50-2. That tradition is shared today from the upperclassman of the Gophers to the younger players not yet familiar with the rivalry. 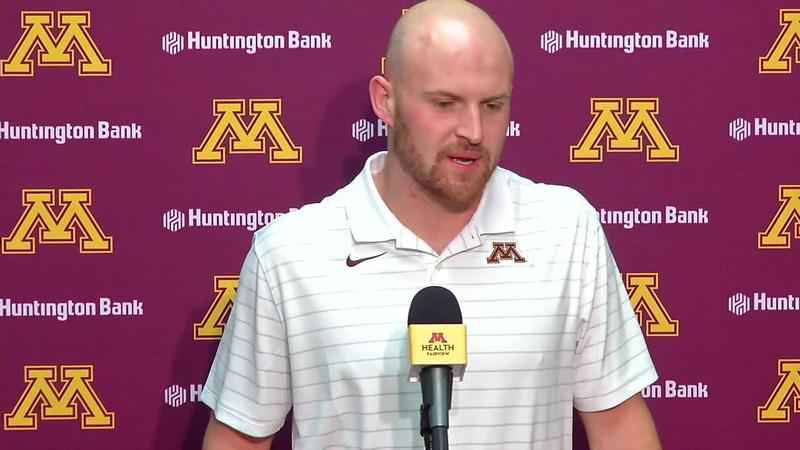 Gophers QB Tanner Morgan met with the media on Tuesday on campus.[KSTP/Jeff Brioschi]

"You get to play in a lot of these rivalry games, games that people care about. It’s exciting to play these games and we’re excited for the opportunity to face Iowa this week," said Gophers QB Tanner Morgan.

Iowa will likely have a new starting quarterback for Saturday’s 2:30 p.m. game.

Alex Padilla led Iowa in its win over Northwestern last weekend and is listed as the No.1 quarterback on the depth chart. Freshman Deuce Hogan was elevated to the backup role with Spencer Petras out with a shoulder injury. The Gophers will have to prepare for both quarterbacks who could see time.

"No matter what quarterback they have, we’ll have that look. We’re going to go through certain situations to prepare us for whoever is back there. Our staff prepares us well and they don’t leave any stone unturned," Mafe added.