Minnesota softball (13-4) returned to Jane Sage Cowles Stadium for the first time in 678 days with an 8-5 victory over Purdue (5-12) Friday afternoon.

The Golden Gophers recorded their 10th win in their last 11 games.

The Minnesota offense was led by Natalie DenHartog, who went 3-4 with a home run and a pair of runs driven, as well as Rylie Costa, who was 2-2 with three runs batted in as the Tracy, Calif., native made her collegiate debut.

Minnesota opened the scoring in the top of the first with a little small-ball and a two-out rally. MaKenna Partain led off with a walk and was sacrificed to second base by Elle Jensen. Two batters later, DenHartog came through with a sharp single to center field, plating Partain with the game’s opening run.

Purdue tied the game up in the top of the second thanks to a Minnesota throwing error, but the Gophers quickly regained the lead in the bottom of the frame as Sydney Strelow was hit by a pitch and came all the way around to score on a double to right center by Costa. 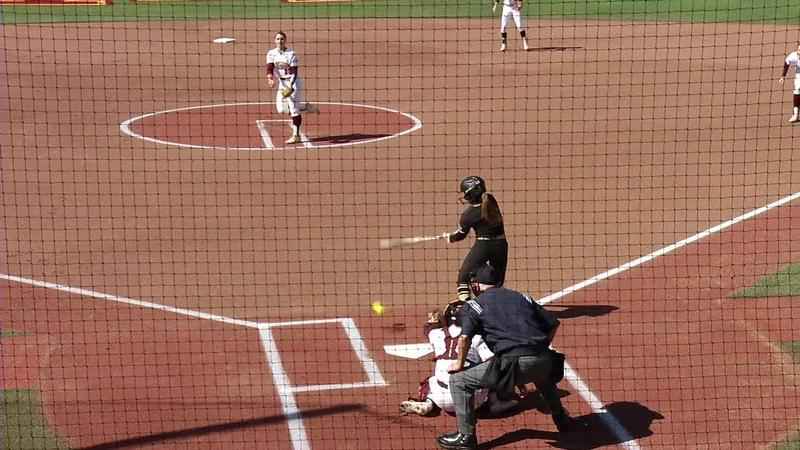 Minnesota softball (13-4) returned to Jane Sage Cowles Stadium for the first time in 678 days with an 8-5 victory over Purdue (5-12) Friday afternoon.[KSTP/Scott Wise]

Minnesota used another two-out rally to double its run total in the third.

DenHartog reached on a one-out double and Sara Kinch got hit by a pitch. Following a fielder’s choice, Ali Lindner, who scored three runs in the contest, walked to fill the bases. Costa came through again as she blooped a single into shallow left field, under the glove of Purdue’s Kiara Dillon, allowing two runs to score and giving the Gophers a 4-1 lead through three innings.

After a scoreless fourth, the Golden Gophers tacked on two more runs in the fifth thanks to solo home runs from both DenHartog (her fourth of the year) and Strelow (her first of the season and second of her career).

Purdue cut into the lead with two runs in the top of the sixth, but Minnesota immediately got those two runs back in the bottom half of the inning. Jensen delivered a bases-loaded single to left field, while Kinch recorded an RBI via a bases-loaded walk two batters later.

The Boilermakers tacked on a pair of runs in the top of the seventh, but Minnesota held off the Purdue comeback.

Amber Fiser collected the win to improve to 6-3 on the season. She struck out four and walked three while giving up five runs, only two of which were earned, in her sixth complete game of the year.

Minnesota and Purdue continue their four-game series Saturday with a doubleheader starting at noon.