Edina returned to the winner’s circle after a one-year hiatus following a 2-1 victory over Andover in the Class AA girls hockey championship game on Saturday, April 3 at the Xcel Energy Center in St. Paul. The Hornets used an efficient offense to solve Andover’s season-long defensive mastery of opponents to win the big-school crown for the fourth time in the past five seasons and gain a measure of revenge for losing its stranglehold on the crown a year ago at the hands of Andover.

Senior defender Lily Hendrikson scored the game-winner early in the second period and the No 2-seeded Hornets (22-0-0) used a stifling defense of its own in keeping the top-seeded Huskies (22-1-0) from a successful title defense and an unblemished season. In 2020, Edina was the top seed and Andover was No. 2, but the Huskies prevailed in a 5-3 victory.

Entering the state tournament, Andover had surrendered just seven goals all season. Only one opponent had scored two goals against the Huskies’ smothering defense and that was Elk River/Zimmerman in Andover’s 8-2 victory in the Section 7AA semifinals.

It is the fourth Class AA championship in five seasons for Edina head coach Sami Reber, a former Hornets’ standout. 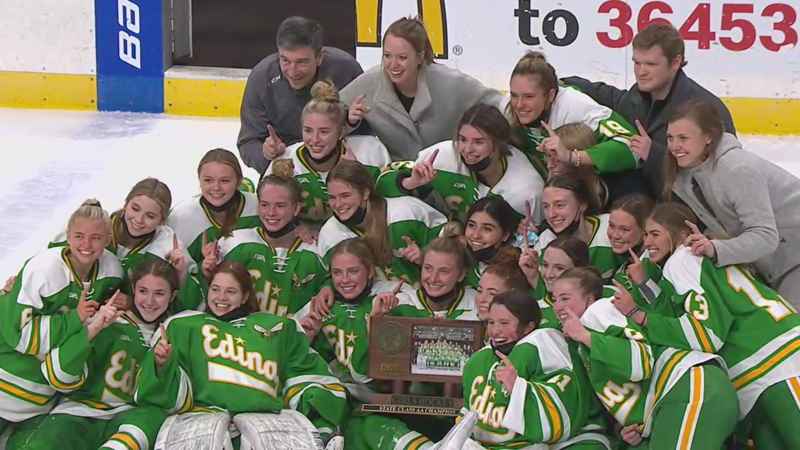 Three goals were scored in a 3 ½-minute span in the second period. Edina scored the last of the spree in building a 2-1 lead after two periods of play. The Hornets’ advantage occurred with 11:15 left in the period on a nifty backhander by senior defender Lily Hendrikson. After being behind the goal as the play unfolded, she zipped in front and quickly handled the carom from just beyond the crease.

Just more than 90 seconds earlier, senior forward Gabby Krause lifted Andover into a 1-all deadlock. She was camped out in front of the crease when she corralled a pass. Calmly, she tapped the puck to her forehand and easily stuffed it past Edina sophomore goalie Uma Corniea. She finished with 30 saves to preserve the victory.

Edina opened the scoring early in the second period when junior forward Berit Lindborg let loose with a shot from the top of the circle after the Hornets had won the faceoff.