Andover continued its journey to what the Huskies hope will be a successful state championship defense with a 7-0 victory over Eastview in the Class AA semifinals of the girls hockey state tournament on Thursday, April 1 at the Xcel Energy Center in St. Paul. Senior defensemen Madison Clough scored two goals and assisted on two others to propel the top-seeded Huskies (22-0-0) into the big-school championship game for the second consecutive season.

The opponent will be a familiar one. Edina, which defeated Minnetonka 4-0 in the earlier semifinal, will get another chance to top the Huskies with a state championship at stake. In the 2020 state tournament, Andover turned back Edina’s quest for a fourth consecutive crown with a 5-3 victory

Andover displayed its typical offensive potency and smothering defensive dominance in earning an opportunity to end the season with a trophy and blue-ribboned gold medals. The Huskies generated 36 shots on goal in building a 2-0 lead after two periods. Senior forward Madelynn Jurgensen opened the scoring in the first period and then sophomore Madison Brown added to the advantage on a goal in the second period.

The Huskies left little doubt to the outcome when they tacked on two more goals early in the third period. Clough made it 3-0 early in the period and senior forward Peyton Hemp, a Ms. Hockey Award finalist, made it a four-goal margin on a short-handed tally. The goals kept coming, too, as Andover added three more for a five-goal outburst in the third period. 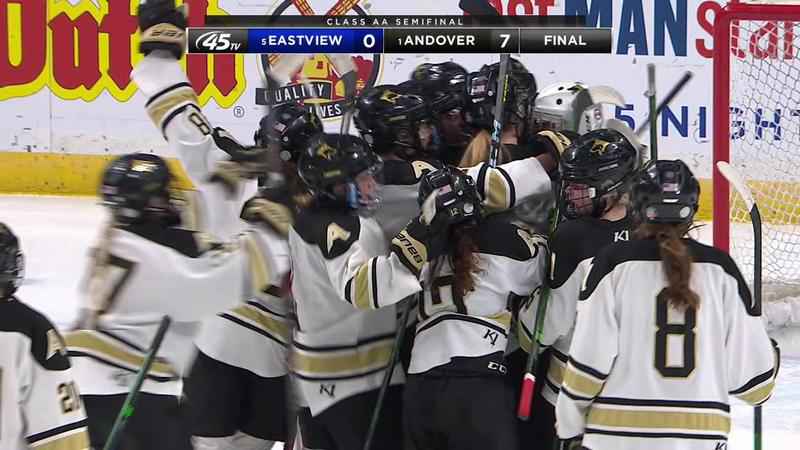 Andover outshot the Lightning (16-5-2), 47-11. The Huskies have surrendered just seven goals this season.