Minneota completed its season without a blemish. Senior guard Abby Rost scored 12 points and junior forward Natalie Rolbieck matched that with 12 of her own to give the Vikings (25-0) another Class A crown to go with ones captured in 2019 and 2013.

But this time around, the Vikings couldn’t exhale until the final horn.

Minneota, which had led by as many as 16 points, held off a series of final surges from Belgrade-Brooten-Elrosa, who had closed to within five points twice in the final minutes. 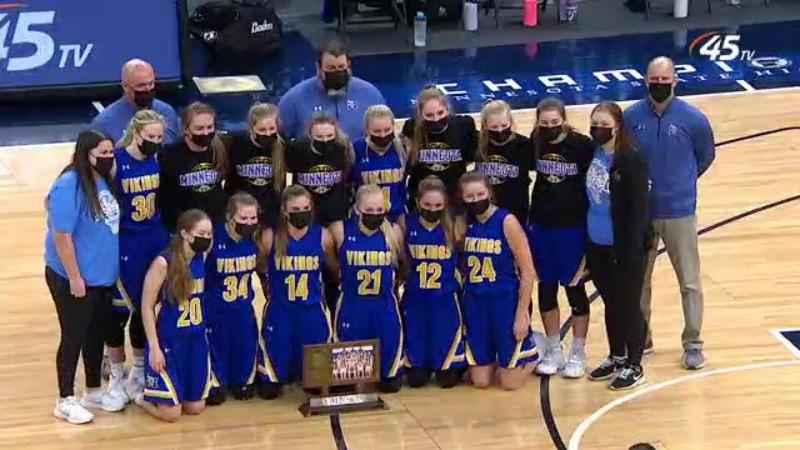 Belgrade-Brooten-Elrosa was attempting to win its first-ever girls basketball state championship. The Jaguars then pulled to within 43-41 on a three-pointer by senior guard Josie Knutson with just more than a minute remaining, but Minneota quickly answered with a reverse layup by junior center Jeren Rost.

A single free-throw from Minneota’s Abby Hennen, a senior guard, boosted the Vikings’ lead to 46-43 with 26 seconds remaining in regulation. After a power layup by Knutson, Hennen was quickly fouled, though, and she made two free throws at the other end to set the score.

Knutson and senior forward Alissa Knight paced the Jaguars (23-2) with 11 points each.

Minneota built a 28-18 lead at the break behind 10 points from Rolbiecki and eight from Abby Rost. The Vikings led by as many as 13 points during the first half and had a nine-point spree at one point. Minneota made 4-of-9 three-point attempts in the opening 18 minutes paced by Rost, who was 2-for-2. Rolbiecki was 2-for-4 from beyond the arc.