The Minneota Vikings (24-0) defeated the Mountain Iron-Buhl Rangers 54-53, Tuesday afternoon at Target Center, to advance to the Class A State Championship.

Senior guard Abby Hennen netted the game-winner for the Vikings on a free throw with two seconds left in regulation. Hennen missed the first shot after being fouled by sophomore guard Sage Ganyo, but she made sure the second one counted. Freshman guard Jordan Zubich heaved up a last-second attempt for Mountain Iron-Buhl, but it fell well short of the basket.

The Rangers were up 51-47 with 4:11 left in the game, but Hennen brought Minneota within 53-50 when she drained a three-pointer at 2:16. Senior guard Abby Rost scored on the Vikings’ next possession and Minneota junior guard Natalee Rolbiecki tied the score at 53-53 on a free throw with 1:06 left in the game.

Hennen and Robiecki tallied 19 and 18 points, respectively, for Minneota. Rolbiecki also grabbed a game-high eight rebounds for the Vikings. Zubich paced Mountain Iron-Buhl with 14 points. Both Zubich and junior forward Ava Butler had six rebounds for the Rangers. 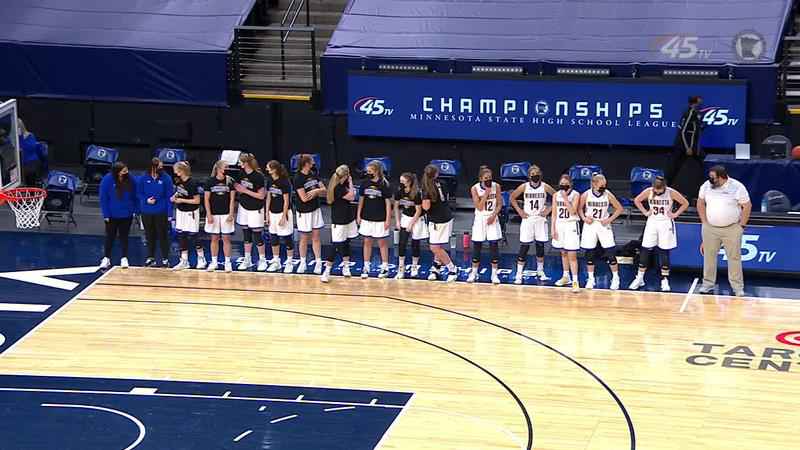 The Minneota Vikings (24-0) defeated the Mountain Iron-Buhl Rangers 54-53, Tuesday afternoon at Target Center, to advance to the Class A State Championship.[Prep 45TV]

Minneota advances to face Belgrade-Brooten-Elrosa for the Class A title. That game is scheduled for 1 p.m. on Friday, April 9. Mountain Iron-Buhl closes its season at 19-5.