Albany endured, and then it surged, Friday afternoon, April 9 with a state championship at stake. The Huskies turned back repeated comeback attempts from young and scrappy Providence Academy to secure the championship.

Senior guard Paige Meyer scored 20 points and had 10 rebounds to spur the Huskies, who used a 15-4 run in the final minutes to break open what had been a white-knuckle game. It is Albany’s first championship since 2008 and joins basketball state tournament trophies from 1980 and 1983.

Albany’s definitive run provided some cushion as the Lions finished with a final surge, but couldn’t make a dent in the Huskies’ double-digit lead. 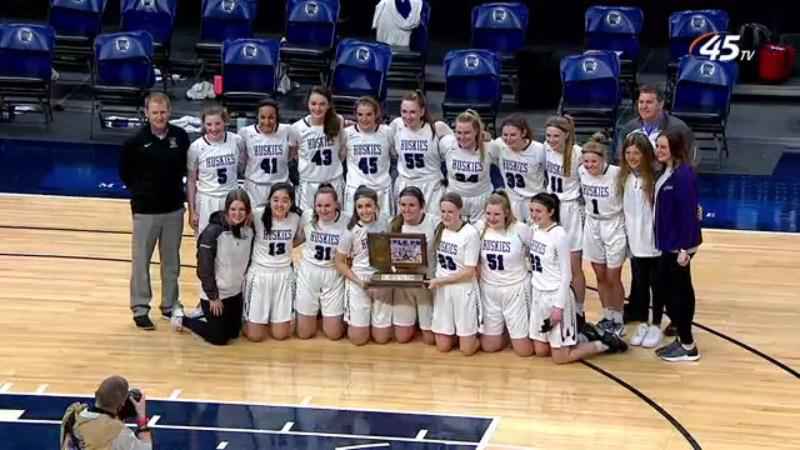 Albany (24-1), whose lone loss this season was to top-ranked New London-Spicer on March 1, held a 35-32 lead with under six minutes remaining in regulation time. But instead of panicking, the Huskies assembled a game-changing run that included key baskets and 6 of 6 from the free-throw line. Freshman guard Alyssa Sand chipped in nine points and junior forward Danica Findley added eight.

Providence Academy (22-2), a team filled with underclassmen, was paced by seventh-grade point guard Maddyn Greenway, who had 18 points, four rebounds, and four assists before fouling out. Grace Counts, a sophomore forward, had 14 points and 13 rebounds.

Albany, which led by as many as 11 points in the first half, had to hang on for an 18-17 lead at the break. While the Huskies held a 13-2 lead at the 12:40 mark, Providence Academy scrapped and hustled to within a point on a huge surge. The Lions, in fact, had a chance to claim a lead, but the final horn sounded when they were trying to get a basket before time expired.

Findley and Sand had five points each for the Huskies, who shot 24.1 percent in the first half. Counts had nine points and six rebounds for the Lions and Greenway had five as the Lions pushed the pace in their effort to battle back from the large deficit. Providence Academy was attempting to win its first Class AA title since 2012.