Francouz steps in, Avs beat Wild in SO, 14th home win in row 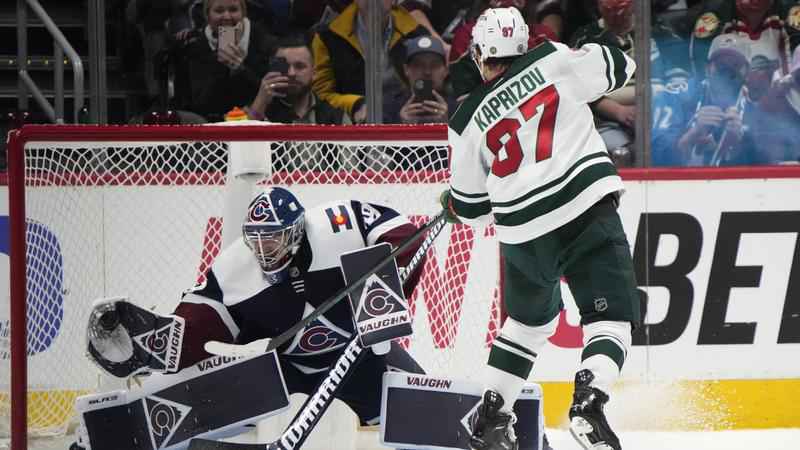 Colorado Avalanche goaltender Pavel Francouz, left, makes a glove-save of a shot off the stick of Minnesota Wild left wing Kirill Kaprizov, right, to end the shootout of an NHL hockey game.[AP/David Zalubowski]

Avalanche goaltender Pavel Francouz stopped 24 shots in relief of injured Darcy Kuemper and three more in the shootout, and Colorado beat the Minnesota Wild 4-3 on Monday for its 14th straight home win.

Kuemper was injured Minnesota’s Jordan Greenway ran into him in the crease and knocked him down. The play drew the ire of Kurtis MacDermid, who dropped the gloves with Greenway.

Kuemper was down on ice for a few minutes, but remained in the game until he was replaced by Francouz with 10:34 left in the second period.

MacKinnon gave Colorado a 3-2 lead at 16:28 of the third with a strange goal. His shot went into Kahkonen’s left pad just above the skate, and the goalie’s leg slid into the net. It was originally ruled no goal, but a review determined the puck crossed the line.

The Wild pulled Kahkonen with 2:57 left and Kaprizov tied it at 17:09 with his 16th goal of the season, sending it to overtime.

Colorado took a 2-0 on goals 1:41 apart in the first period. Rantanen got the first goal on a 5-on-3 advantage, his 20th of the season, and Newhook got the second soon after Minnesota killed off the second penalty.

Fiala’s goal 33 seconds into the second period. It stayed 2-1 until the third period when Kaprizov scored at 6:46.

NOTES: Mats Zuccarello had two assists for the Wild. … Avalanche RW Valeri Nichushkin entered health and safety protocols before the game. Kiefer Sherwood was recalled from the AHL to replace Nichushkin in the lineup. … Minnesota has lost nine of its last 12 games in Denver.

Wild: At Chicago on Friday.

Avalanche: On the road against Anaheim on Wednesday.