Five Hoosiers in double figures in win over Gophers 73-60 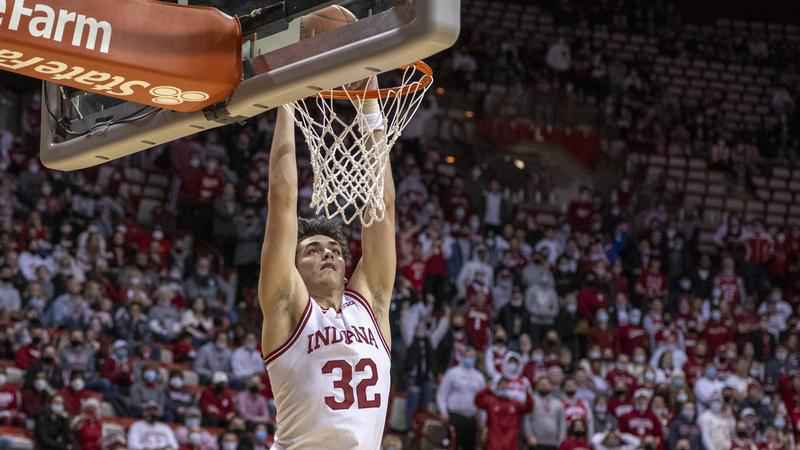 Indiana guard Trey Galloway (32) scores with a dunk during the second half of an NCAA college basketball game against Minnesota.[AP/Doug McSchooler]

Trayce Jackson-Davis had 13 points and 12 rebounds and Indiana beat Minnesota 73-60 on Sunday.

With a Minnesota defense concentrating on Jackson-Davis, who averages just under 20 points a game, the Hoosiers responded with five players scoring in double figures including Xavier Johnson with 14 points, Rob Phinisee 13, Parker Stewart 12 and Race Thompson 10. Still, Jackson-Davis posted his sixth double-double this season and the 27th of his career.

Trailing by 10 at halftime, Willis and Battle scored all the Gophers’ points in an 18-7 run to open the second half and briefly take a one-point lead. But Miller Kopp hit a 3-pointer and Indiana attacked inside in a 17-5 run with six points from Thompson for a 65-54 lead with four minutes remaining. The Gophers didn’t get closer than nine after that.

With the Gophers sagging inside on Jackson-Davis in the first half when he scored just four points, Indiana was able to take advantage from the perimeter with Phinisee — averaging just 4.5 points per game — coming off the bench to hit a career-high four 3-pointers and Thompson adding two from the arc and scoring 10 points. A 17-4 run to close the half led to a 39-29 lead.

Indiana outshot Minnesota by 10%, made 9 of 24 3-point tries to 5 of 25 for Minnesota and ended up even in the paint after the Gophers held an advantage in the first half.

Minnesota next plays at Michigan State on Wednesday while Indiana is at Iowa on Thursday.