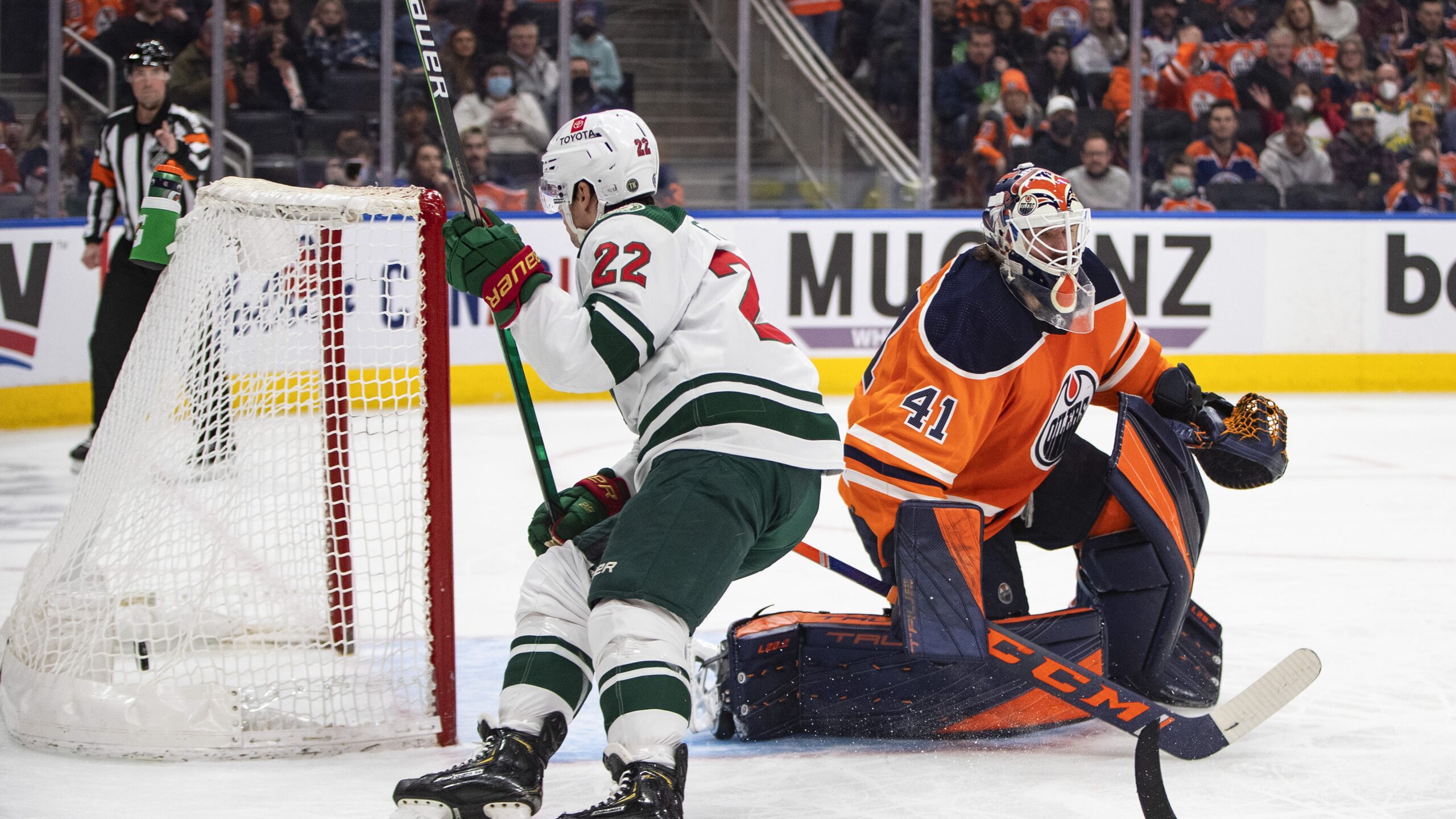 EDMONTON, Alberta (AP) — Kevin Fiala had two goals and an assist as the Minnesota Wild beat the Edmonton Oilers 7-3 Sunday.

Matt Boldy and Mats Zuccarello each had a goal and an assist, and Brandon Duhaime, Joel Eriksson Ek, and Connor Dewar also scored to help the Wild snap a two-game losing skid. Kaapo Kahkonen had 30 saves.

Evander Kane, Tyler Benson and Zach Hyman scored for the Oilers, who ended a five-game winning streak with their first loss under new coach Jay Woodcroft. Mike Smith gave up four goals on seven shots before he was pulled with 6:22 left in the first period. Mikko Koskinen replaced him and stopped 12 of the 15 shots he faced.

Edmonton once again found itself chasing the game early as the Wild scored 2:49 into the opening period on their second shot, as a sloppy clearing attempt led to Duhaime beating Smith to the glove side. It was the 33rd time in the last 41 games that Edmonton has allowed the game’s first goal.

Minnesota scored two more goals within the next 3 1/2 when Eriksson Ek scored his 16h of the season on the power play at 5:21 on the Wild’s fourth shot, and then made it 3-0 at 6:17 mark when Fiala scored on a 2-on-1 on its fifth shot. It was the sixth time in Smith’s last nine starts that he has allowed at least two goals on the opposition’s first six shots.

Fiala scored his second of the game and 16th of the season with just over six minutes to play in the opening period, chasing Smith.

Edmonton got a goal back with 3 1/2 minutes to play in the first period when Kane tipped home a shot from in tight on the power play past Kahkonen.

Minnesota restored its four-goal lead 8 1/2 minutes into the second period as Dewar was credited with the goal after a shot hit the post and then caromed off of Koskinen’s leg and into the net.

The Wild scored their sixth goal on 15 shots when Boldy beat Koskinen with six minutes to play in the second.

Benson scored his first NHL goal a couple minutes later on a scramble in front of the Wild net to make it 6-2.

Minnesota made it 7-2 when Zuccarello picked the top corner on a breakaway opportunity five minutes into the third.

Hyman scored with just over a minute left for Edmonton.

NOTES: It was the Oilers’ fifth game in the last seven days. … The Wild made a couple of roster moves in advance of Sunday’s game, activating F Nick Bjugstad, who had been out with an upper-body injury since Jan. 6, and calling up D Calen Addison from Iowa of the AHL. F Victor Rask and D Dakota Mermis were sent to Iowa. … Remaining out with injury for the Wild was Matt Dumba (lower body). … The Oilers were without Kris Russell (undisclosed), Zack Kassian (fractured jaw), Duncan Keith (upper body) and Jesse Puljujarvi (lower body).

Wild: At Ottawa on Tuesday night in the second of a four-game Canadian trip.

Oilers: At Tampa Bay on Wednesday night to open a five-game trip.