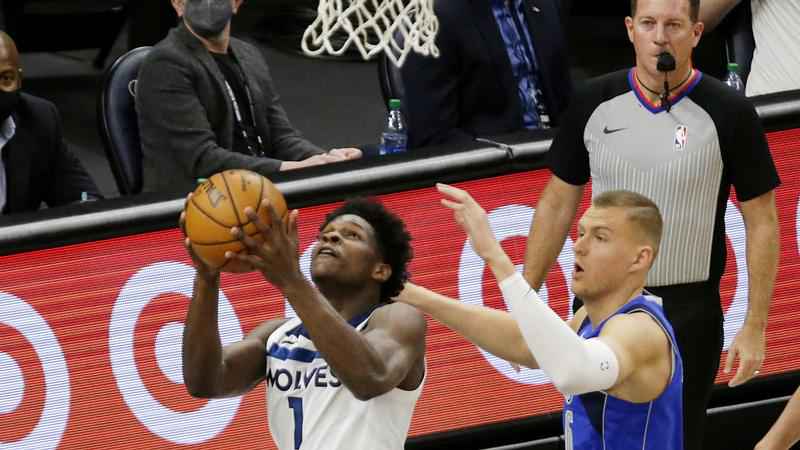 Anthony Edwards scored 30 points in his final audition for NBA Rookie of the Year, leading the Minnesota Timberwolves to a 136-121 victory over the postseason-bound Dallas Mavericks on Sunday night.

Luka Doncic had 18 points, six rebounds and six assists in 21 minutes for the Mavericks, who were unharmed by the meaningless defeat. They get the No. 5 seed in the Western Conference playoffs, pitted against the No. 4 seed Los Angeles Clippers in a first-round series beginning next weekend.

The Mavericks (42-30) broke their three-way tie with the Portland Trail Blazers and Los Angeles Lakers by virtue of their Southwest Division title.

The Mavericks were able to play without worry, having secured a top-six spot and avoiding the new play-in round that owner Mark Cuban said recently was an " enormous mistake."

This was only their fourth loss in their last 16 games, with Doncic, Kristaps Porzingis and the rest of coach Rick Carlisle’s crew bringing plenty of confidence they can do some damage in what ought to be a wide-open bracket on the Western Conference side.

The Timberwolves brought a last-day-of-school vibe to the game, laughing their way through warmups and enjoying a sharp night of 3-point shooting at 42.5% (17 for 40). Karl-Anthony Towns and D’Angelo Russell scored 23 points apiece.

They set a franchise record for their highest score (113 points) through three quarters on their way to a seventh win in their final 12 games, finishing with the sixth-worst record (23-49) in the league after spending much of the season at the bottom. Their first-round draft pick, owed to the Golden State Warriors for the Russell trade last year, is only top-three protected.

Jaden McDaniels had 19 points on 8-for-13 shooting, including a soaring dunk set up by a no-look pass from Russell early in the second quarter. McDaniels and Edwards formed quite the rookie tandem for Minnesota this season, giving the long-woebegone franchise a true lift and a couple of keepers to build around Towns and Russell.

Timberwolves: This was the 36th game of 20-plus points for Edwards, extending his franchise rookie record. … Edwards was 5 for 9 from 3-point range. He made the fourth-most 3-pointers (171) by a rookie in NBA history, trailing Donovan Mitchell (187), Damian Lillard (185) and Saddiq Bey (175).