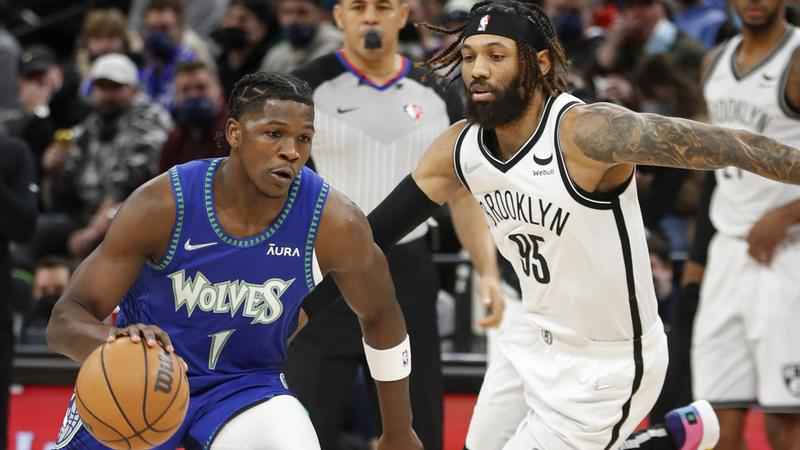 Karl-Anthony Towns overcame a poor shooting night, scoring 15 of his 23 points in the fourth quarter as the Wolves put the game away. Jaylen Nowell added 16 points, Taurean Prince 15 and Jaden McDaniels 14 as the Timberwolves won for the third time in four games.

Kyrie Irving scored a game-high 30 points for the Nets, while Patty Mills hit five 3-pointers on the way to 21 points. Kessler Edwards added 15 points, and James Harden had 13 points and 13 assists for Brooklyn, which is 2-2 since losing leading scorer Kevin Durant to a sprained ligament in his left knee.

Minnesota led by as much as 15 in the third quarter before a late surge pulled the Nets to within seven heading into the fourth. Then Towns went to work, hitting a pair of 3-pointers and converting a three-point play as part of his huge fourth quarter.

Meanwhile, Russell led Minnesota with 17 points in the first half as the Wolves shot 56.8% from the floor to take a 72-62 lead at the break.

Minnesota caught a huge break early in the fourth quarter, just after Irving made two free throws to cut the lead to 106-102. On the next Wolves’ possession, a wild pass was headed out of bounds when it deflected off referee Curtis Blair.

Josh Okogie recovered the loose ball just before it crossed the half-court line. As the shot clock wound down, the Wolves worked it to Prince in the corner, and he drained a 3-pointer to push Minnesota’s lead back to seven. The Nets didn’t get closer than six points the rest of the way.

Anthony Edwards made his 300th career 3-pointer in the first quarter. At 20 years and 171 days, he’s the youngest player in NBA history to amass 300 3-pointers, surpassing the record held by Luka Doncic by 187 days.

Nets: Coach Steve Nash said that guard Joe Harris had suffered some “setbacks” in his recovery from his late-November ankle surgery. He initially was expected to miss 4-8 weeks, but Nash said Harris wasn’t yet healthy enough to resume practice.

Timberwolves: Minnesota played without G Patrick Beverley, who injured his right during Wednesday’s game at Atlanta. … Over their previous five games, the Timberwolves were outscored by 51 points in the third quarter. On Sunday, Minnesota was only minus-3 (33-30) in the third.

Nets: After going 2-2 on a four-game road trip, Brooklyn is at home vs. the Lakers on Tuesday.