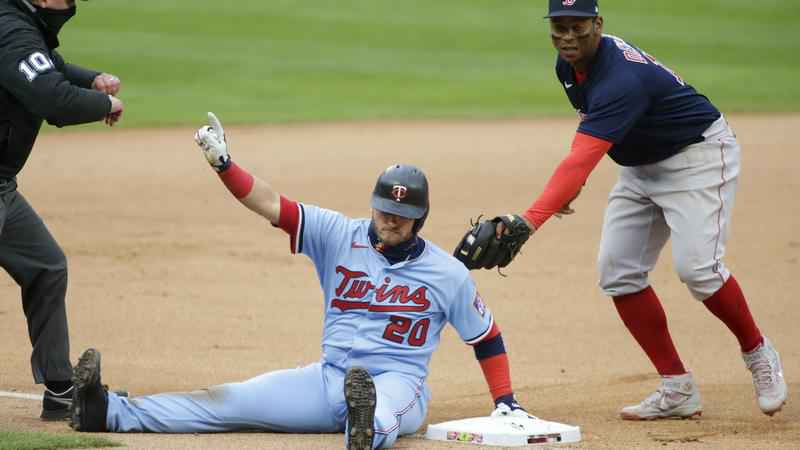 3B Josh Donaldson is back for the Twins, but the offense continued to struggle in a 7-1 loss in the second game of Wednesday's doubleheader.[(AP Photo/Andy Clayton-King)]

Alex Verdugo had three hits, including a two-run single in a six-run fifth inning, and the Boston Red Sox extended their winning streak to nine games, beating the Minnesota Twins 7-1 to sweep Wednesday’s doubleheader.

Eduardo Rodríguez (2-0) pitched five innings and gave up one run on five hits for Boston, which has come from behind in six of its nine wins this season after opening the year with three straight losses. The Red Sox have their longest winning streak since a 10-game run in 2018, a season that ended with a World Series title.

Verdugo had five hits in the doubleheader and capped the day with his second homer of the season in the seventh inning. The Red Sox won the first game 3-2.

José Berríos (2-1) surrendered four runs in 4 1/3 innings for Minnesota, giving up four hits and three walks. Berríos, who retired nine of the first 10 batters he faced, walked Franchy Cordero with the bases loaded for the first run of the fifth before departing.

The Twins have lost five straight.

The fifth unraveled quickly for Berríos when Rafael Devers’ drive to center caromed off the glove of a diving Jake Cave for a double. Christian Vázquez walked and Bobby Dalbec singled before the walk to Cordero.

Rodríguez settled in after allowing Minnesota to score a run in the first. He gave up three hits in the first but just three baserunners through his final four innings.

The doubleheader was scheduled after Monday’s game was postponed following the fatal police shooting of a Black man in a nearby suburb.

Nathan Eovaldi (2-1) gave up two runs on five hits in five innings for the Red Sox. Matt Barnes earned his second save.

The Red Sox, who finished last in the AL East in 2020, are the first team since the 1991 Seattle Mariners to lose at least three games to start the season and follow that by winning at least seven straight, according to the Elias Sports Bureau.

“For me, it’s the pitching,” Eovaldi said of the difference from last season. “I like our team a lot. I like where we’re at. I feel like at any point in the ballgame, we’re going to be able to take the lead, put up runs and keep us there.”

Kenta Maeda (1-1) was undone by Minnesota’s defense in the second inning, including his own throwing error that allowed a run to score. He pitched 4 1/3 innings and gave up three runs — two earned — on seven hits and two walks.

“It was mainly my delivery,” Maeda said. “I haven’t had too many opportunities to pitch in the cold weather. But that’s something I’ve got to get used to, being a Twin, being in Minnesota, things like that. And then last year, we started here in June with the summer camp, so this is the first time I’m experiencing the cold here.”

Red Sox: RHP Bryan Mata, one of the team’s top pitching prospects, underwent Tommy John surgery on his right elbow on Tuesday. The procedure was performed by Dr. Neal ElAttrache in California.

Twins: 3B Josh Donaldson was activated for the second game of the doubleheader and played for the first time since straining his right hamstring in the season opener. He went 1 for 2 with a walk. LHP Brandon Waddell was optioned to the team’s alternate training site. … DH Nelson Cruz returned to the lineup after missing Tuesday’s game with a non-COVID-19-related illness.

Michael Pineda (1-0, 1.64 ERA) will start the final game of the series for Minnesota on Thursday. Boston counters with Garrett Richards (0-1, 10.29). Pineda has won eight straight decisions dating to July 2019. Richards bounced back from a tough 2021 debut to give up two runs in five innings against Baltimore in his last start.