Defense dominates for Illinois in 14-6 win at Minnesota

Chase Brown rushed 33 times for 150 yards, and the Illinois defense delivered six sacks and two interceptions of Minnesota quarterback Tanner Morgan on the way to a 14-6 victory on Saturday.

Kerby Joseph picked off Morgan at the Illini 45-yard line with 38 seconds left to halt the too-little-too-late rally by the Gophers (6-3, 4-2), whose four-game winning streak that catapulted them into sole possession of first place in the Big Ten West Division was stopped cold.

“It was awesome. We developed a lot of different schemes and a lot of different things during the week. Our guys do an amazing job, so to see it all come to fruition is not a surprise,” said tight end Trip Reiman, who caught his first career touchdown pass on the first play of the second quarter.

Morgan scored on a fourth-and-1 bootleg with 4:56 to go after going 7 for 8 for 68 yards on that drive to pull the Gophers within one score. 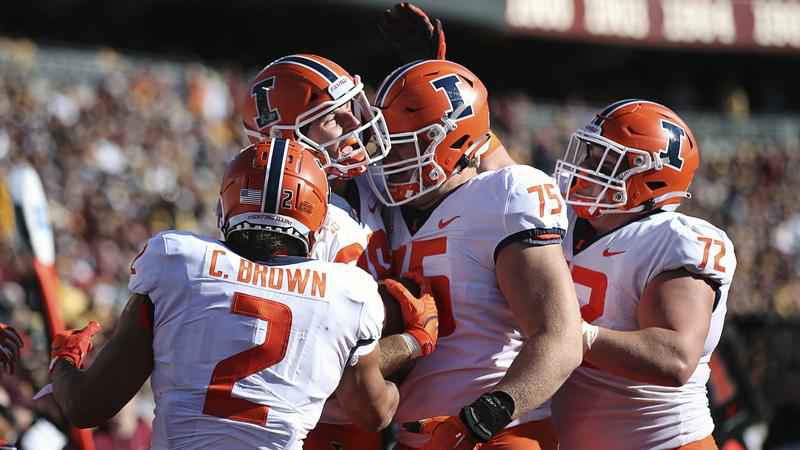 Brandon Peters attempted a season-low nine passes for the Illini (4-6, 3-4), but he was as sharp as he needed to be with seven completions for 80 yards and a score to help keep a bowl game in play.

The Illini finished the game with seven consecutive punts, except for a kneel-down at the end of each half, but Brown moved the chains with a 7-yard run off left tackle on third-and-4 near midfield around the 3-minute mark. Blake Hayes pooched his last punt to land it at the 2, leaving only 1:12 remaining and no timeouts for Morgan and the Gophers.

After a 38-yard strike to Dylan Wright, Morgan was taken down for an 11-yard sack by Isaiah Gay so hard the Illini linebacker hurt himself on the play.

The damage was already done by the Illinois defense, which frequently pressured Morgan and forced him out of the pocket to throw on the run when he wasn’t sacked. The Gophers never found their usual rhythm, netting a season-low 89 rushing yards after racking up 634 yards on the ground over the previous two games. They crossed the 30-yard line without scoring three times, including a sack by Owen Carney Jr. on fourth-and-6 at the 22 in the third quarter.

“We stacked the line, so all the gaps were spaced out. It really helped us stop the run game,” defensive tackle Jer’Zhan Newton said.

Illinois played a flawless first quarter, matching Minnesota’s per-game average allowance with 93 rushing yards. Seth Coleman provided the spark by tipping Morgan’s third-down pass at the line, deflecting the ball toward fellow linebacker Tarique Barnes for an interception near midfield to thwart a promising opening possession for the Gophers.

“They did a great job with disguises, all kinds of different stuff, but I can’t let tipped balls happen,” said Morgan, who finished 15 for 28 for 180 yards.

Said Minnesota coach P.J. Fleck: “I know he could have played better, but it doesn’t just fall on one guy.”

Wide receiver Isaiah Williams scored on a 2-yard jet sweep to finish a strong response to the turnover. Then after forcing a three-and-out, the Illini cruised from their own 9 to reach the end zone again on the first play of the second quarter.

The Illini just sat on their two-touchdown lead after that, and their defense was so relentless they just got away with the play-it-safe game.

The Gophers had a fourth-and-1 run stopped for no gain at the Illinois 22. Later in the first half, Matthew Trickett pulled a 45-yard field goal wide left. Trickett missed a his extra-point try in the fourth quarter, too, as the Gophers fell to 1-18 under Fleck when trailing at halftime. Their only such win was last month at Purdue.

“One of the things that we look at is to play from ahead. Minnesota is wired that way,” said Illinois coach Bret Bielema, who went 7-0 against the Gophers while he was in charge at Wisconsin.

Illinois: This wasn’t quite as significant as the win at Penn State but an encouraging development nonetheless in the first year under Bielema, another sign the Illini can win with the power running and complementary defense he employed in the previous decade with the Badgers.

Minnesota: The bid for a West Division title wasn’t really damaged, because the Gophers were almost certainly going to have to beat both Iowa and Wisconsin anyway to win it. They still can, if they win out. The problem is this feeble performance by the offense portends doom against the defenses the Hawkeyes and Badgers will present.

“That is not our football team. That’s not the style that we play,” Fleck said. "That’s not the consistency we play with, and when it happens it’s like a big elephant in the room.”

Illinois has next week off before visiting No. 19 Iowa on Nov. 20. The Illini have lost seven straight games to the Hawkeyes and have not won on the road in the series in six tries since 1999.

Minnesota plays at Iowa next Saturday. The Gophers are 0-4 against the Hawkeyes under Fleck and haven’t won in Iowa City in nine trips there since 1999.