Kirk Cousins scored on a 1-yard quarterback sneak with 2:26 remaining on Minnesota’s fifth third-down conversion of its go-ahead drive, and the Vikings snapped out of their mid-game slump just in time to beat the Chicago Bears 29-22 on Sunday.

Cameron Dantzler sealed the victory that put the Vikings (4-1) alone in first place in the NFC North by ripping the ball away from former teammate Ihmir Smith-Marsette near the one-minute mark after a pass from Justin Fields to the Minnesota 39.

Fields went 15 for 21 for a season-high 208 yards and his first touchdown pass in 15 quarters and rushed eight times for 47 yards, but the Bears (2-3) didn’t have enough defense to pull it out.

Justin Jefferson finished with a career-high 12 catches for 154 yards and caught a 2-point conversion pass from Cousins to push the lead to seven, and Dalvin Cook rushed for 94 yards and two scores.

Cousins set a franchise record with 17 consecutive completions to start the game, and coach Kevin O’Connell put on a play-calling clinic as the Vikings reached the end zone on their first three possessions for a 21-3 lead midway through the second quarter. Three times last week against New Orleans, they had to settle for field goals after crossing the 20. 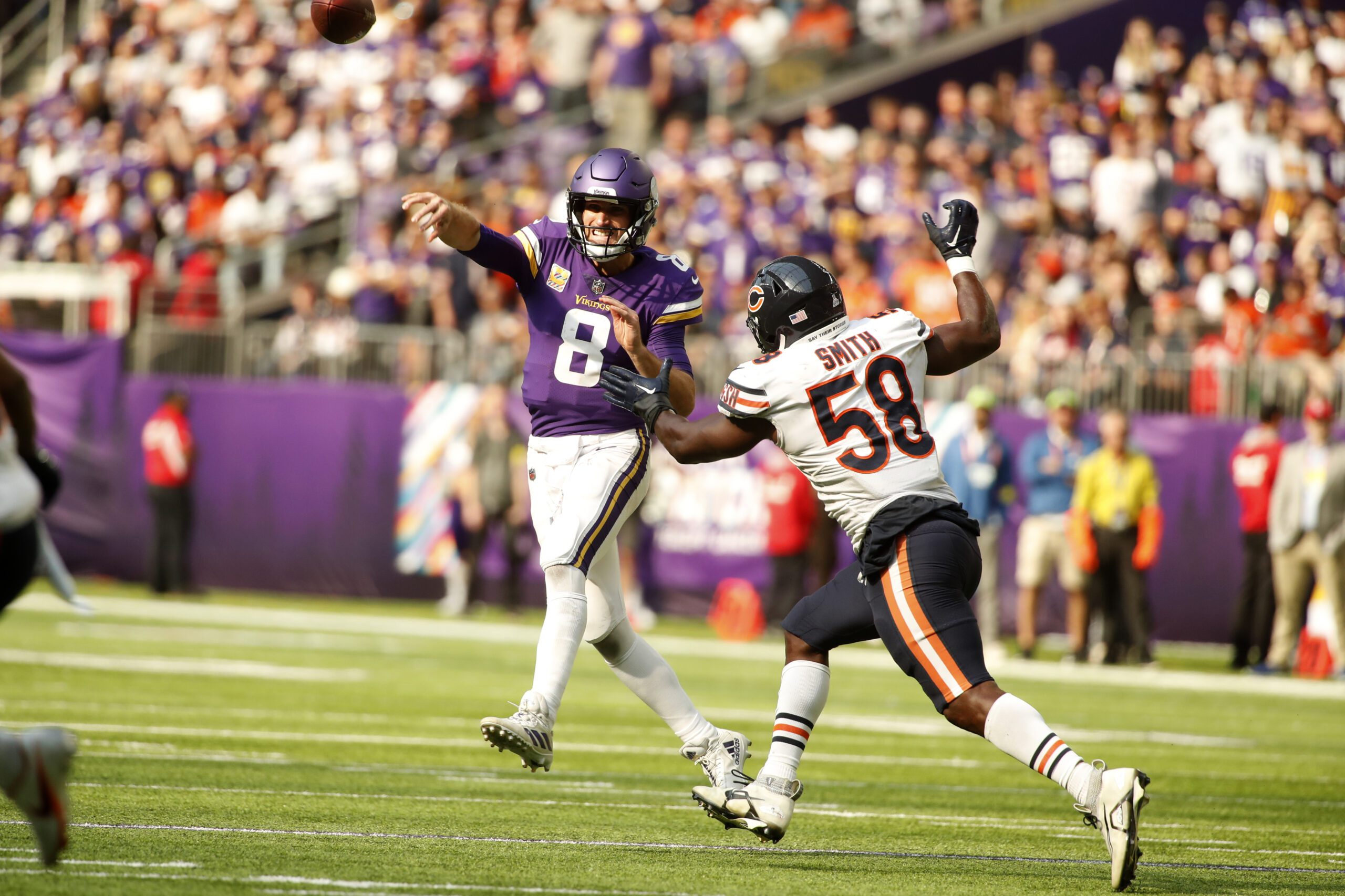 After a punt, two missed field goals and an interception threatened to ruin Minnesota’s stellar start, the Vikings had one more commanding drive.

David Montgomery scored Chicago’s’ first touchdown on a 9-yard run. Fields hit Velus Jones Jr. from 9 yards out on the first possession of the third quarter get the Bears back into it.

Early in the fourth, Kindle Vildor picked off Cousins as he rolled right on first down and tried to connect with Adam Thielen at the 30, and the return gave the Bears the ball near midfield. Two plays later, Fields got loose for what would’ve been a 52-yard touchdown run, but Smith-Marsette was called for an illegal block above the waist to wipe that out.

Cairo Santos instead made his third field goal of the game to give the Bears for a 22-21 lead with 9:31 to go. The Vikings responded with a 17-play, 80-yard march that drained an even 7 minutes off the clock. That drive included a 5-yard run with less than three minutes left by the pocket-preferring Cousins on third-and-5 from the Chicago 20.

With division rival Green Bay playing early in London, much of the broadcast was shown on the videoboards as fans filed in and sunlight streamed through the west-facing windows.

When the Giants took the lead for good in the 29-22 victory over the Packers, the Vikings’ game operations crew sounded the celebratory Gjallarhorn. The crowd roared as Green Bay fell to 3-2 and put Minnesota ahead in the division standings.

The Vikings under new special teams coordinator Matt Daniels had been stellar in nearly every facet of the kicking game over the first four games, but there were some hiccups Sunday.

Greg Joseph, who was the NFC Special Teams Player of the Week after going 5 for 5 on field goals to beat the Saints, had a 53-yard try go wide right at the halftime gun and a 51-yard attempt blocked by Dominique Robinson on Minnesota’s only possession of the third quarter.

Jalen Reagor, who had his first Vikings touchdown on a jet-motion shovel pass from Cousins, fumbled a punt return that he recovered around midfield in the second quarter.

Minnesota: Rookie RB Ty Chandler left the game with a hand injury on special teams. … Rookie CB Akayleb Evans was being evaluated for a concussion in the fourth quarter.

Minnesota: At Miami next Sunday.