Hayfield, which began the boys basketball state tournament as the No. 4 seed from the southern geographic region of Minnesota, turned heads for the final time during the modified 2021 season with a 61-60 victory over Hancock in the Class A championship game on Saturday, April 10 at Target Center in downtown Minneapolis.

Ethan Slaathaug, a 6-foot-3 senior guard, scored 20 points and junior guard Easton Fritcher chipped in 13 to send the Vikings (21-4) to theira first basketball state championship in five appearances. In 2001, Hayfield was the Class A runner-up. En route to their historic milestone, Hayfield, which opened the season 1-2, defeated Legacy Christian Academy, the No. 1 seed in the south, in the state quarterfinals and then topped Badger-Greenbush/Middle River, the No. 3 seed in the north in the semifinals.

Using precise shot selection and selfless ball distribution for the final time this season, Hayfield had to fend off a formidable challenge from Hancock (19-6), another No. 4 seed to open the state tournament, before it could celebrate the Class A title.

Fritcher gave the Vikings a 60-52 lead with 49.4 seconds remaining in regulation when he made a single free throw. Hayfield needed every bit of that cushion because Hancock closed with a flurry. The Owls went on a 5-0 run and had a chance to tie the score when the possession arrow pointed their way with 22.1 seconds left. Five seconds later, however, the Owls turned the ball over.

Astonishingly, Hancock stole the ball on the inbounds, but was unable to find the equalizer. Instead, Fritcher was fouled on the rebound, and on the other end, he added another free throw for a 61-57 margin with 5.7 seconds left. Hayfield didn’t defend the long inbound pass and Hancock senior guard Kody Berget made a three-pointer at the horn to set the score. 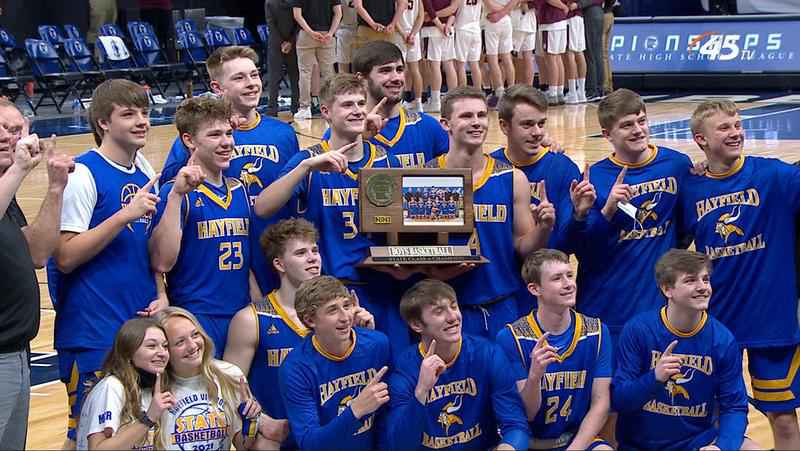 Hancock, which at one point was 6-4 this season, was led by junior center Matt Thompson’s 18 points and 12 rebounds. Sebastian Felix, a junior guard added 13 points.

Hayfield, the Section 1A champion, built a 39-31 lead at the break while shooting nearly 70 percent from the floor. Included in that precision was 6 of 9 from three-point range. Each of Hayfield’s five starters had at least one made three-pointer in the first half. Senior guard Ethan Slaathaug paced the Vikings with 14 points and was 6 of 8 from the field. Junior forward Easton Fritcher added nine points.

As a team, Hayfield distributed the ball well with 10 assists on 16 made baskets.

Hancock was nearly as prolific from the field in a crisply-played first half, shooting nearly 62 percent. The Owls made 5 of 7 three-pointers and were paced by junior center Matt Thompson, who had 12 points and five rebounds.