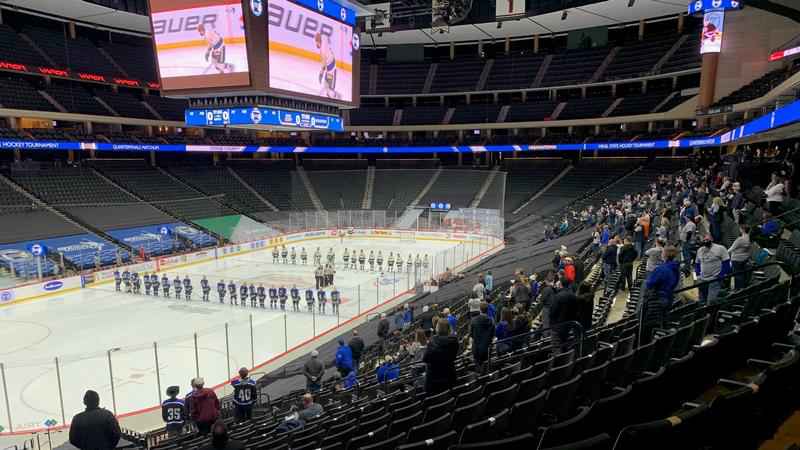 Dodge County, a southeastern Minnesota cooperative made up of seven member schools, made its debut in the boys hockey state tournament a memorable one following a rousing 7-3 victory over top-seeded Hermantown in the Class A quarterfinals on Tuesday, March 30 at the Xcel Energy Center in St. Paul.

Dodge County junior winger Brody Lamb fueled the Wildcats (18-3-1) with six goals and junior center Matt Donovan had three assists in sending Dodge County to Friday’s small-school semifinals against the winner of Tuesday’s late semifinal between No. 5 Delano and No. 4 Little Falls.

Hermantown was skating with a roster comprised mostly of junior varsity players after the majority of the varsity squad was ruled out of the game due to COVID-19 contact tracing. A section playoff opponent had a positive test, triggering the contact-tracing among the Hermantown players.

Three members of Hermantown’s varsity who did not play in the section playoff game, including sophomore and leading-scorer Zam Plante, were able to play in the State Quarterfinal.

Dodge County, the Section 1A champion, took control from the start behind Lamb’s first two goals in the first period. He opened the scoring on an even-strength goal with 5 minutes, 55 seconds elapsed in the first period, and then the Wildcats doubled the lead on his second tally 33 seconds later. Lamb pushed the Wildcats lead to 4-0 midway through the second period. Ninety-one seconds later, senior forward Cameron Pietrusa drew the Hawks (19-2-0) to within 4-1 after two periods of play.

Hermantown stormed back in the third period and drew to within 5-3 with 3:01 remaining in regulation when Plante scored on a stuff-shot from the left post. But Dodge County sealed the victory when

Lamb scored his fifth goal on a long-range soft backhand into an open net with 1:29 remaining in regulation. He capped his double hat trick on a breakaway with 59.1 seconds left.

Lamb’s output was one goal short of equalizing a single-game state record of seven goals set by Eveleth’s John Mayasich in 1951. Lamb scored his six goals on 11 shots on goal.