Lakeville South was staring at its first loss of the season Friday night, but instead, turned it into another first: The school’s first-ever appearance in a boys hockey state championship game. The turnaround came when the Cougars erupted for four goals in the third period to turn what had been a deficit into history following its 5-3 victory over Wayzata in the Class AA semifinals at the Xcel Energy Center in St. Paul

Senior center Cade Ahrenholz and senior wing Cam Boche had two goals each in the third-period spree that powered the Cougars (20-0-2) into the big-school final on Saturday night against either No. 1 seed Eden Prairie or No. 4 Maple Grove.

Lakeville South grabbed its first lead, an advantage it wouldn’t relinquish, with 5:16 remaining in regulation when Ahrenholz converted a power-play opportunity on a nifty wrist shot from between the circles.

That lead quickly grew less than a minute later when Boche re-directed a blast from the blue line that sailed through traffic and into the Trojans’ cage. 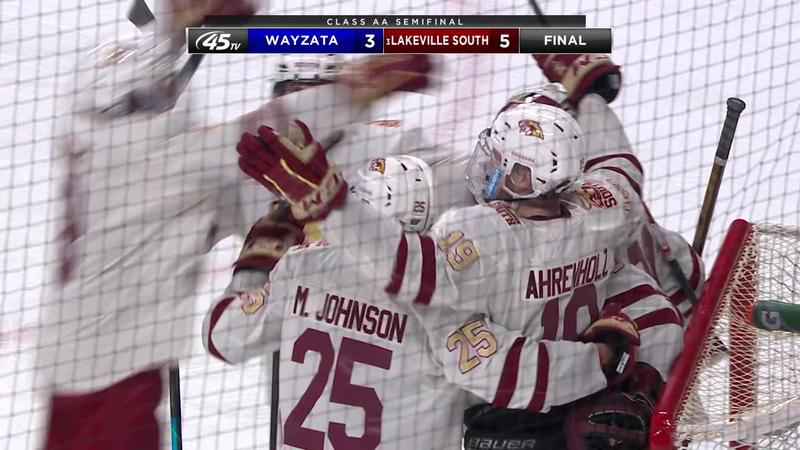 That extra goal came in handy when Wayzata (13-6-2), playing with an extra attacker, pulled to within 4-3 with 1:21 remaining after senior forward stuffed in a rebound from in front. But less than a minute later, Boche streaked down the far side of the ice and sent a soft, long-range shot that found its way safely into an empty net that completed the scoring and a dramatic turnaround for the Cougars.

Lakeville South pulled to within 2-1 in the closing moments of the second period when sophomore Ashton Dahms cashed in on a rebound in front with nine seconds remaining. It was a crucial goal for the Cougars, who had been matching the Trojans in play, yet still trailed by two goals on the scoreboard. Through two periods, the Cougars had outshot the Trojans 23-20, including 13 in the second period.

Perhaps that goal gave the Cougars some extra pep because it paved the way in the equalizer with more than 10 minutes remaining in regulation. Ahrenholz lifted Lakeville South into a 2-all deadlock after taking a couple of whacks at the unattended puck on the right side of the goal before finally being able to flip it over Wayzata senior goalie Dary Sanders.

Wayzata built a 2-0 lead when senior forward Dylan Lewis score with 1:42 remaining in the second period. From the outset, Wayzata wasted little time in gaining the upper hand when senior forward Hayden Davison scored just 25 seconds into the game. Wayzata was attempting to qualify for the big-school championship game for the first time since winning the crown in 2016.