First-time state tournament entrant Gentry Academy made quite a splash in its debut, culminating a three-game run of dominance with an 8-1 victory over Dodge County in the Class A championship game of the Boys Hockey State Tournament on Saturday, April 3 at the Xcel Energy Center. Senior forward Damon Furuseth had a goal and three assists to help power the Vadnais Heights-based private school to a successful first state tournament trip.

The Stars (19-0-0) blazed through the tournament field by outscoring the opposition, 21-4. In the championship game, Gentry Academy outshot the Wildcats, 54-9.

Gentry Academy built a 4-0 lead after two periods while outshooting unseeded Dodge County (19-4-1), 35-5 with one period to play.

Junior forward Barrett Hall and senior forward Bailey McGraw scored goals less than a minute apart midway through the period to create plenty of separation. McGraw scored when sophomore forward Reese Shaw, from behind the end line, zipped a past to him in front and he reciprocated for the nice feed with a one-time shot. Hall converted when a shot on goal hit him and caromed downward. He took a whack at it and it skittered past Dodge County junior goalie Isaac Dale. 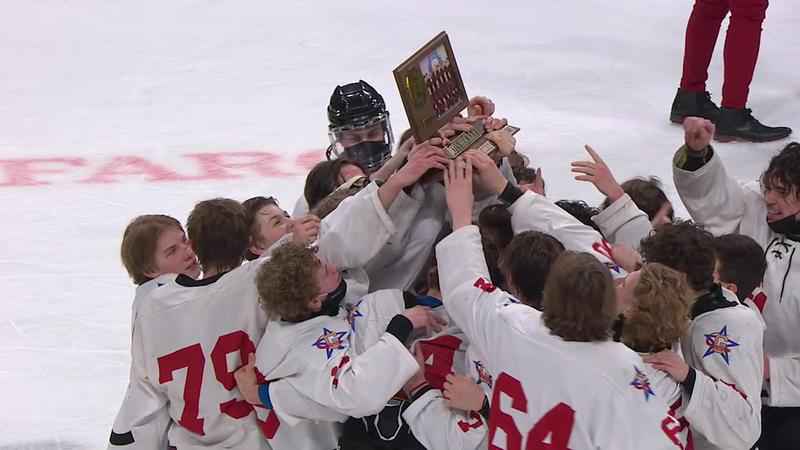 Junior Brody Lamb got Dodge County on the board with his 10th goal of the tournament with 14:39 left in the third period. From between the circles, he fired a one-timer that drew smiles from the crowd, who had been awed by his performance during the week. He had six goals in Dodge County’s quarterfinal victory over Hermantown and then had a hat trick in the semifinals against Little Falls. His tally drew the Wildcats to within 4-1.

Dodge County was attempting to complete a magical-type state championship run. The Wildcats defeated No. 1 Hermantown in the quarterfinals and then No. 4 Little Falls in the semifinals in earning a spot in the Class A championship game for the first time in their program history.

But the Wildcats could draw no closer. Instead, the Stars answered with four more goals in the final minutes to put an exclamation point on their championship run.