The Eagles, runner-up three times since 2016 and in each of the past two seasons, had the makeup of winning their third championship since 2009. Since their only loss of the season, a setback to longtime Lake Conference rival Edina on Jan. 23, the Eagles assembled a 19-0-2 run to end the season, a spree that reached a crescendo with a thrilling 2-1 victory in double overtime over Lakeville South in the Class AA championship game late Saturday night, April 3 at the Xcel Energy Center in St. Paul.

But the Eagles had to go to great lengths to claim this championship.

Almost exactly 24 hours after earning a berth in the title game with an overtime victory over Maple Grove in the semifinals on Friday, Eden Prairie needed a second extra session to get past a Lakeville South team that was poised and determined to make the most of its first opportunity in a championship game. 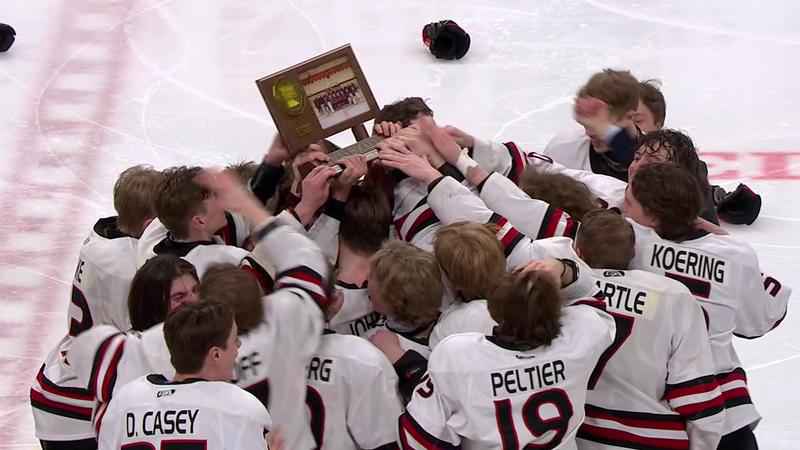 Junior forward Jackson Blake put an end to the long, intense drama when he gathered in a rebound between the circles and fired a blast with 14:54 remaining in the second overtime session to give the Eagles (21-1-2) the victory.

It was a stunning turn for Lakeville South, who had vowed to rebound from a short stay during the 2020 state tournament. That year, the Cougars lost by four goals in the quarterfinals to Eden Prairie and then gave up three more in the consolation semifinal loss to Maple Grove. Lakeville South scored no goals in either of those games. Fast forward to the 2021 season and Lakeville South stuck around quite a bit longer.

Lakeville South found the equalizer with 3:56 left in the second period to create a 1-all tie. Sophomore wing Tanner Ludtk created the play when he wheeled around a defender in the right circle and then angled in toward the goal. As he converged, he slid a pass to the far post where teammate Cam Boche, a senior wing, was camped. Boche received the pass and softly tapped it into an open goal past Eden Prairie senior goalie Zach Hayes.

Eden Prairie opened the scoring with 5:56 elapsed in the first period. Senior forward Carter Batchelder scored his sixth goal of the tournament when he took a drop pass from junior forward Jackson Blake in the left circle and whistled a shot into the upper right corner.