In a game filled with wacky goals, it was a textbook play with crisp, precision-like passing that sent top-seeded Eden Prairie to a 6-5 victory in overtime over No. 4 Maple Grove in the Class AA boys hockey semifinals late Friday, April 2 at the Xcel Energy Center in St. Paul.

Senior forward Carter Batchelder completed a hat trick with a one-timer courtesy of a gem of a feed from senior forward Drew Holt to not only end a thrilling and riveting semifinal with 1:02 left in the extra session, but also send the Eagles (20-1-2) into the big-school championship game for the second consecutive season. Holt finished with a goal and three assists while junior forward Jackson Blake had a goal and five assists for the Eagles, the Class AA runner-up last season to Hill-Murray.

A flurry of play late in the third period led to three wacky goals and a 5-all deadlock. Just nine seconds after Eden Prairie had taken a 5-4 lead, Maple Grove, again, found the equalizer. This time it was senior forward Ian Barbour, who had stormed the Eden Prairie goal, and took a whack at a bouncing puck that somehow found its way behind Eagles goalie Zach Hayes. 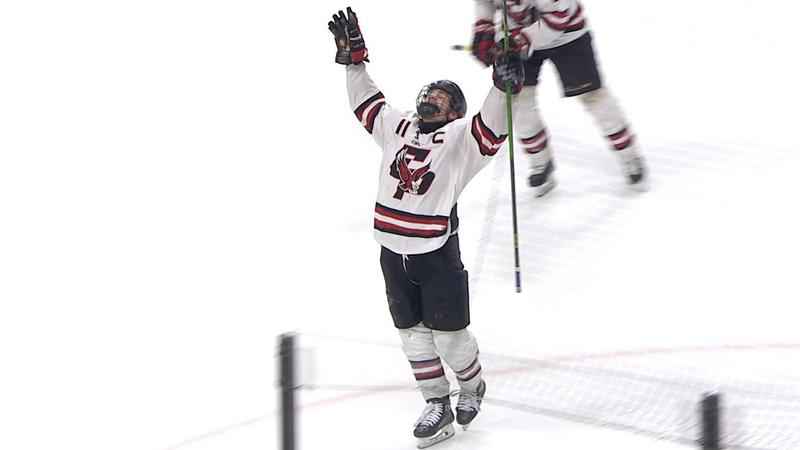 With four minutes remaining in regulation, Eden Prairie grabbed a 5-4 lead in an unconventional way. Just before the puck reached the end line, senior forward Drew Holt threw the puck on the net, and good fortune was with him, as the shot caromed off the stick of Maple Grove senior goalie Jack Wieneke, for what some may have believed might hold up for a winning goal.

Twelve seconds earlier, Maple Grove climbed into a 4-all tie when senior forward Chris Kernan whistled a one-timer past Hayes.

Eden Prairie pulled into a tie for the second time in the game with 4:15 elapsed in the third period when senior forward Carter Batchelder swooped down the left side, angled toward the goal and slipped a backhand between the pads of Maple Grove senior goalie Jack Wieneke.

In the opening moments of the third period, Maple Grove created a 3-2 advantage when Kernan was credited with a goal that ricocheted its way through players before resting in the goal.

Maple Grove climbed into a 2-all deadlock early on in the second period when senior forward Sam Jacobs slid a backhand past Eden Prairie senior goalie Zach Hayes on the power play. Less than a minute earlier, Eden Prairie had jumped on top on a power-play goal of its own, this tally from senior defender Mason Langenbrunner.

Jacobs had his first goal of the game late in the first period on a power-play goal, but the Crimson’s lead was short-lived as junior forward Jackson Blake converted on Eden Prairie’s power play chance.